Today we went to Pont du Gard and Chateauneuf du Pape.  Pont du Gard is a well preserved Roman aqueduct and one of the best surviving Roman ruins anywhere. We figured we’d need only an hour there, but we ended up spending a few hours because it was so impressive, not to mention it is located in a beautiful setting. We were both blown away that something like this could have been built 2,000 years ago.

Sorry to get educational, but we were really impressed by what an engineering feat this must have been at the time, and we wanted to share some background. This 30-mile aqueduct was built to supply water to Nimes, one of ancient Europe’s largest cities. The aqueduct sloped one inch every 350 feet to keep water flowing. It took 24 hours for the water to make the 30-mile trip. Throughout the Roman Empire, a vast system of aqueducts such as this, were used to establish major cities.

It was a huge celebration when water first flowed into Nimes. Water then became a symbol of social status, bordering on wastefulness for those with the means to have it. Huge community baths were created, which were so elaborate that they contained libraries, museums, spas and exercise rooms within them. Damn those Romans.

All this education about the Romans made us thirsty, so we headed for Chateauneuf du Pape for some wine tasting.  Thanks to Robert Parker, this village now boasts to have some of the best wines in the world. Despite its wine being world famous, it is still a very, very small village.

Unlike Napa and Sonoma, all the wineries here have a tasting room in the village versus at the winery. This could really make for some fun if you didn’t have to drive home. There are no tasting fees, and you only taste the wines that you ask for. Even though this is one of the more expensive regions in France, generally wines are still more affordable than those compared to Napa or Sonoma.

In these smaller villages, far fewer people speak English. Since we don’t speak French, this makes it a little more difficult. But it made for a fun experience when a very nice French lady let us sit in her tasting room for 30 minutes as she described all her wines to us in French. Brent just kept saying “JoBu needs a refill.” 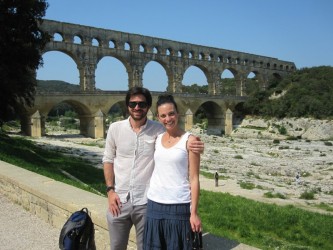