Umbria has been good to us. We got a couple clear, sunny days at the agriturismo, perfect for lounging by the pool and reading. We had a tradition of starting happy hour off with a poolside bottle of monastic beer.  Having a drink in that peaceful setting will surely be among our favorite memories of the trip.

Normally, we had the place to ourselves, but one afternoon an older, Italian couple that we had grown fond of came out there. Shortly after Brent got us a couple monastic beers from the restaurant, we noticed the man got up and left. Two minutes later he emerged with beer and two glasses of his own. As he walked by to rejoin his wife, he had a giant grin on his face, gave us a thumbs-up sign and said, “Buona idea!” Brent laughed, and pulling a Cuban out of his pocket said, “Speaking of buona ideas…”

We ventured out to a couple of the nearby towns, Assisi and Spello…which we like to refer to as Ahh Si Si Si Si Si and SPEEEEELLLOO (think Brando yelling Steeellllaa!). Assisi is known for its two saints, St. Francis and St. Clare. We enjoyed visiting the basilicas where their tombs and old relics are on display. Spello isn’t really known for anything except being a nice hill town. Both had terrific views of the valley dotted with red roofed towns and olive groves.

Pleasantly, neither town met our criteria for touristy…defined by us as having a McDonald’s in the main square. Spello felt especially sleepy, and it wasn’t hard to find yourself mingling with the locals. At the edge of town, we stopped in for gelato and found the only other customers were five older Italian men having a lively conversation while licking gelato and reading the paper.

That night back at the B&B, the management arranged for a television to be brought in so that everyone could watch the Champions League Final, featuring Milan against a German team. We were looking forward to watching an important soccer game in a small room crowded with rowdy Italians who were coming by from the neighboring B&B.

Having just recently watched a few soccer games in Spain, it was an interesting contrast. We were surprised at how subdued they were during the game. When Milan won, there was a good 20 seconds of silence before they cheered, and then the cheering was pretty weak to be honest. We thought, maybe even though they’re Italian, they’re not Milan fans, but after talking to them we learned that they were from Milan and in town for a wedding.  Maybe there was a good reason why they weren’t more excited for the win, but we found it puzzling.

The best part about watching the soccer game was seeing with our own eyes how the stereotype of Italian men and their mothers played out. Five minutes into the game, a young man got up from the table where he was seated next to his fiancé and pulled a chair up by his mom. When the game started getting pretty intense, mom and son held each other in a close embrace, and he caressed her cheek with the back of his hand while they watched. It was tough to focus on the game with this going on. While this exchange seemed odd to us, his fiancé seemed okay with the scene.

We hate to leave this place, but we’re moving on for a couple nights in Rome. Ciao! 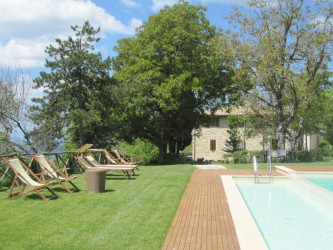