We have been in Buenos Aires for four days and are loving this city. Our original plan was to go to Vietnam for the last leg of our trip, and we were close to buying our plane tickets when we remembered that we needed visas. Since we were up in the hills of Umbria we couldn’t get the paperwork together. For several days, we went back and forth on where to go instead and finally settled upon Buenos Aires.  We bought our tickets and since we were leaving the following day we didn’t leave ourselves much time to plan, but luckily we found a great hotel in a great neighborhood.

BA is a huge city and is divided up into many neighborhoods, which are each very different. We are staying in the Palermo neighborhood, which has been a great fit for us…lots of young people, and many restaurants and boutiques (although if you get off the main streets, you may find yourself in a fairly run down area). Since BA is so big, we’ve spent most of our time so far just exploring Palermo. We plan to spend a few nights in the Recoleta neighborhood next week.

A few initial thoughts about life in BA…

-The steaks and wine are as good as everyone says. Coming from Europe, it’s fun to be somewhere where the dollar goes farther. We’ve enjoyed some great Argentinean steak dinners with local Malbec wine for a lot less than we’re used to paying.

-The locals are unbelievably patriotic.  Everyone flys the Argentina flag from their apartments, cars, office buildings, parks, or anywhere else they can hang it or fly it from (think America post 9/11 multiplied 3x)….very cool to see.

-Even though they speak Spanish, everyone says “Ciao” instead of “Adios.”

-They are maniacs on the road. While there are lanes, marked with white lines, the locals completely ignored this and drive straddling lanes and making up their own rules as they go.  Oh yeah, they also don’t turn on their headlights after dark for some strange reason.

-In order to enter most stores (and even some restaurants) you have to get buzzed in. We enjoyed our table at lunch yesterday watching people struggle to enter even though they could see the packed restaurant.

-Tango is alive and well in the streets on the weekend.

For more pictures, check out our Buenos Aires photo album dated 30th May 2010 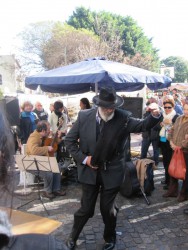