Last weekend we were in Edinburgh during the Fringe festival (www.edfringe.com). Fringe is the largest art festival in the world and runs for three weeks in August. This made for a great, lively atmosphere in the historic capital – plenty of bustle, entertainment and beer gardens. The Royal Mile was packed with all sorts of people – both tourists and performers – especially lots of out-there, artsy folks. It’s a great opportunity to see all sorts of performances – comedians, bands, dance, theatre, etc. We caught one stand-up show of Scottish comedians, but between the heavy Scottish accent and the slang we missed a lot of the jokes.

One of the highlights of our weekend was tasting scotch at The Scotch Whisky Experience. The tour started with a ride inside a whisky barrel through a “distillery” while the process of whisky making was explained (this felt like a grown up version of the Peter Pan ride at Disneyland). Then we learned about the four main whisky-making regions of Scotland (Highlands, Lowlands, Speyside, and Islay) and their distinctive qualities (florally, peaty, fruity, etc). We also got to stand inside a beautifully displayed room of the world’s largest whisky collection – over 3,500 bottles. Later we tasted whisky from each of the four areas. It made for a lot of whisky drinking at 11:30 in the morning.

Later in the day we did a blitz tour of Edinburgh Castle, walked all over, and in the evening did a ghost tour that was highly recommended by a couple of locals. It was called “The Real Mary King’s Close” and while it wasn’t the best in the way of ghost stories, it was a really cool visit into 16th century Edinburgh. The closes were originally narrow streets with houses along both sides, built up to seven stories. The alleys got very little light at the bottom and sewage ran right through the streets into the North Loch below (now a garden with lovely flowers blooming from all that fertile soil). Most of the closes were built over but this tour takes you inside some of the old remaining dwellings. It was like stepping back in time. Very cool. Plus our tour was lead by a real 16th century housemaid, so there’s that too. 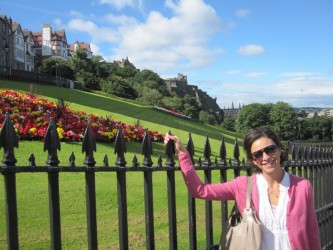