More doberdans (hellos)! This time from Croatia. With over 1,000 islands there’s no doubt Croatia has countless beautiful spots, but Dubrovnik, on the southern end of the mainland, remains “the pearl of the Adriatic.”

We were very taken by the charm of the Old Town: the Venetian architecture, the red tiled roofs and the traffic-free cobbled lanes that rise up steeply to the imposing wall that has surrounded and protected Dubrovnik for over 1,000 years. The cobbled streets are immaculate – cleaned every morning to a shine, and as tourists from London we really appreciated this detail. And while there are the standard kitsch souvenir shops, there’s no Starbucks or Pret, and that’s always a welcome change.

Part of the charm of being in Dubrovnik was that there wasn’t too much to do. Naptime became a very important event around which we planned our day. Some of our more aggressive outings included a stroll on the town wall, a visit to the old fort of St Lawrence and a cable car ride up to Mount Srd for expansive sea views. We also spent some time along the promenade of the Old Port where the sea meets the breakwater and sprays unsuspecting passersby. Another highlight was watching the sunset with a bottle of Ozujsko at Buza, a bar perched dramatically over the sea. Mostly we enjoyed people watching from the terrace of a cafe on the Stratun, bemused by the boatloads of tourists coming in off the cruise ships.

We found the recent history of Croatia very interesting, especially with the help of our Croat tour guide Petar, who explained a lot as he drove us along the scenic, coastal road. It was hard to believe that just over 20 years ago this town and country were engaged in warfare for their independence from Yugoslavia. Dubrovnik fared better than most towns, but still most of it had to be rebuilt, and if you look at the roof tiles you can tell the bright new tiles from the few original ones that survived.

Our day with Petar was great, “thanks God.” (His way of ending nearly every sentence.) Our first stop was Ston, a village that was completely destroyed in the war that is known for its salt production. We passed lots of mussel and oyster farms along the way. We then took a boat to the walled, island town of Korcula where Marco Polo hails from. We had a delicious seafood lunch on a patio over looking Marco’s house, and that was about all there was to do in Korcula that day. From there we went back to the Peljesac Peninsula where we learned all about Croatia’s wine industry, which has made a really big comeback since the days of communism. The wine was a pleasure to drink (of course!) but we also enjoyed many good eats like black squid ink risotto and octopus salad. The biggest surprise was our lunch at a Bosnian restaurant that we liked so much we wanted to go back for dinner but we just couldn’t find room in our tummies.

It was a very interesting time to be in Croatia because in two months they will be joined with the European Union. Their currency, the kuna, will be phased out over the next five years. Most businesses are already accepting euros. Croatia is the second most Catholic country in Europe (after Poland) and people still have very strong family values. Petar told us that it is common for a man to continue to live with his parents after his is married. Mom and Dad on one floor, brothers and their families each on their own separate floors. Besides the occasional pickpocketing common in any touristy area, Dubrovnik has no crime. There are lots of concerns as this relatively safe and self-sustaining country enters the big leagues of the EU. Hopefully not to much of what they pride themselves on will be compromised during the integration.

For more pictures, check out our Dubrovnik photo album dated 29th May 2013 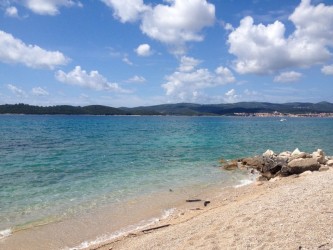