Today we took a day trip to the Cu Chi Tunnels with our friendly guide Mr. Vu to learn more about the American War (what they call the Vietnam War). First thing upon arrival was to watch a Vietnamese propaganda film from the war era in which the Viet Cong are extolled as “American killer heroes” (a good number of them being young women). Afterward, Mr. Vu showed us a model of the network of tunnels and underground bunkers, which were used to covertly move supplies and as meeting places, hospitals and kitchens.

Tunnel entrances were just big enough for a small-sized person to slip through and were easily concealed with dirt and leaves. The tunnels would have been infested with poisonous insects and malaria was rampant among those living there. Soldiers stayed in the cramped tunnels during the day and came out only at night to collect food left by local farmers, tend their crops and scavenge for weapons. We took a brief crawl through the tunnels, which have been widened to accommodate tourists. Above ground, Brent had the chance to fire an AK 47. It was LOUD.

There was quite an interesting display of the simple yet effective booby traps used by the Viet Cong. For example, there were many different types of pit traps, which if fallen into, were lined with poisonous spikes. The VC were very resourceful, repurposing US bombs to create their own weapons and land mines. A man demonstrated how VC soldiers made rubber sandals from tires. The American army used Agent Orange and other defoliants to deprive the guerilla soldiers of tropical cover. Even so, the VC were like ghosts.

It was a really thought provoking visit and the most remarkable thing to us is that even though this is such recent history, the Vietnamese do not hold a grudge against Americans. We spoke to many different people about this, and everyone had the same attitude. The Vietnamese considered this to be a war between the governments, not the people, and they are very happy to welcome Americans (and our money) to their developing country. 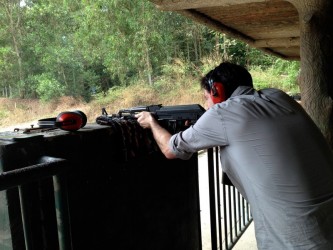