From Da Nang we moved on to the town of Hoi An, known for its tailors, lanterns and old world charm. Hoi An used to be a renowned trading port, and the influence of many countries can still be seen. You’ve got the Japanese Covered Bridge, the Chinese Assembly Halls and the Chinese merchant homes that have survived over two centuries. This was one of our favorite stops on the trip.

We continued to just love Vietnamese cuisine, and one of our favorite restaurants of the trip was here in Hoi An. It was called Morning Glory, after the flower, or perhaps better said, the leaves of the flower. Turns out the leaves of the morning glory plant are the second most consumed food in Vietnam after rice. This is because it grows everywhere and pretty much all year long. It tasted like spinach, sauteed up with garlic and chili. Delish.

One thing that we really enjoyed was a bicycle ride through the countryside surrounding Hoi An. The guide took us to different people’s homes to watch local craftsmen at work. We saw the making of straw sleeping mats, incense sticks and mother-of-pearl inlaid furniture. We also saw the making of a traditional, woven bamboo basket boat used for fishing. Brent had a chance to try to navigate one (which actually requires a good bit of skill). It was really humbling to see how people in this part of the world live a simple life with lots of hardship like frequent flood and poverty. We met the cutest little boy who was full of joy playing with the simplest of toys, a ball. We wanted to package the moment up and keep it forever, to remind us of how different it is from our culture, where we all just have so much stuff.

Back in town, it was hard to imagine how Hoi An could become any more charming. And then….evening fell! As soon as it was dark, locals and tourists float candles on the river, lanterns are lit and sparklers go off from ancient balconies. It was magical.

For more pictures, check out our Hoi An photo album dated 28th December 2013 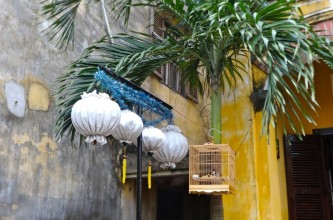