Last weekend we met our friends Dani and Hendrik in Germany’s modern port town, Hamburg. We certainly enjoyed Hamburg more in the company of our German friends, former locals who knew all the good spots to visit and who graciously acted as our personal translators.

Much of Hamburg was leveled in WW2 so instead of charm, it has more of an industrial and edgy feel. We covered a lot of ground in two days, with plenty of refreshment stops sprinkled in along the way. We saw Hafencity, Europe’s largest urban development project, where modern apartment buildings have sprawled up alongside old warehouses. All the talk here is of the much-anticipated, long-delayed and over-budgeted philharmonic building. We also visited Sternschanze, Hamburg’s alternative district, which is a living museum of street art and great for people watching. Tired of walking, we boarded a harbour cruise and made our way to Hamburg’s beach, a very unexpected stop on any city tour. One of the things that really impressed us about Hamburg was the size of its port (second largest in Europe). Apparently it’s where many famous ships like the Queen Mary dock annually to be serviced.

We really enjoyed biking along Aussenalster Lake and admiring some of Hamburg’s finest mansions. Our favorite neighborhood was Eppendorf, a leafy residential area with boutique shops where we had a nice, slow brunch. Perhaps most enlightening was the somewhat seedy Reeperbahn, aptly described by Dani as Hamburg’s “whoring district.” What maritime city would be complete without a legacy of prostitution? It remains a legal enterprise in Germany, and the red-light district is a popular place for nightlife. Brent had a chance to walk down the most famous street, which is blocked off by modesty walls (women get egged if they dare enter). He came out grinning from ear to ear…

We had a good time around the corner at an Irish pub, listening to live music until the small hours of the morning. By the end of the weekend, we felt both exhausted and exhilarated by Hamburg, such a unique and vibrant German city. 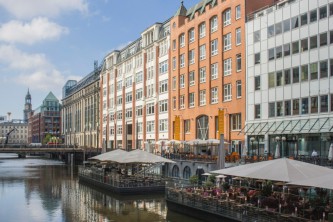