Can’t believe we live in London! The first week was a bit of an adjustment. Coming off our vacation, Brent had a lot on his plate his first week back at work. We’re also busy taking care of living details, visas and housing. Right now we are in corporate housing in the Bayswater/Notting Hill area of town.

The best part about our first week here was already having our first visitor – brother Matt! It was nice for Katie to have her brother’s visit to look forward to. We spent a lot of time knocking around different neighborhoods: Notting Hill, Chelsea, Soho, Mayfair, Kensington and the South Bank. We made a few touristic stops like Piccadilly Circus, Trafalgar Square, Covent Gardens, and the Churchill Museum and Cabinet War Rooms, which were really interesting.

For Matt’s birthday, we saw Henry VIII at Shakespeare’s Globe Theatre. Seeing a play in the Globe was awesome because it is just like Shakespeare’s original theater. It’s small and round with an open, thatch-roof and wooden benches for seats. Just like in Shakespeare’s time, the cheap tickets are on the ground level, where the “groundlings” stand during the entire performance.

Another highlight of our week was seeing Trooping the Colors at Buckingham Palace. This is a royal pageantry held every year for The Queen’s ceremonial birthday, which happened to be our first full day here. Even though we were amongst a crowd of thousands, we were actually able to see The Queen (and Prince William) quite well during the ceremony. During the ceremony, the Royal Air Force did an air show and there was quite a lot of pomp and circumstance. We thought it was awfully nice of The Queen to have her birthday party coincide with our arrival to the city.

Front row center in our week was World Cup action. It was pretty cool that whenever we needed a sightseeing break, we could duck into a pub, grab a pint and catch a soccer match. It was brilliant (as the Brits would say) watching USA tie England in a pub crowded with England fans. One afternoon we were watching a game and the entire bar emptied out to see thousands of rowdy, naked bike riders passing on the street (see video). Seeing the naked cyclists, for a moment Katie felt like she was back in San Francisco. Turns out this was part of the annual World Naked Bike Ride protesting against oil dependency. They definitely got our attention.

All in all it was a great week. Matt even kick-started us back into a work out routine with morning runs through Hyde Park, which seems to have stuck so far. Thanks for making the trip our Matt! 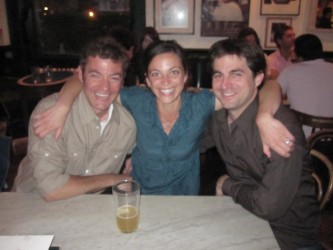