A relaxing weekend. A small seaside village. World famous oysters. Fresh sea air. And all this only one hour away from London? Sounded like a no brainer, so off we went for an overnight to a fishing harbor town called Whitstable. The town is said to be one of the few remaining traditional English towns, virtually free of chain restaurants (“virtually” because there are a couple in fact). But nevertheless, it has retained its charm and historic character and was a nice change from the bustling city.

Many of the main streets of Whitstable are linked by cleverly named narrow alleys, which were originally used by fisherman making their way to the beach. One is known as Squeeze Gut Alley, which requires walking through sideways. The town has been famous for its oysters since Roman times, so we got our fill of those, which made Brent happy. At low tide, the beach provided a generous bounty of beautifully intact seashells, which made Katie happy.

From Whitstable, we took a short bus ride into Canterbury to indulge our passion for Chaucer. We caught the cathedral (one of the oldest in England) at twilight, perfect timing to see it still lit up against a darkening sky, but late enough to miss opening hours. In Canterbury, we enjoyed a coffee, a pint and some window shopping. After a couple of hours, we were running a bit ragged, so we headed back to Whitstable and found that without a dinner reservation in a town of only a handful of restaurants, a tourist could go to bed without a proper meal. Eventually, we settled into one of the two chain restaurants, which was able to seat us immediately, and had a laugh at the irony of it. 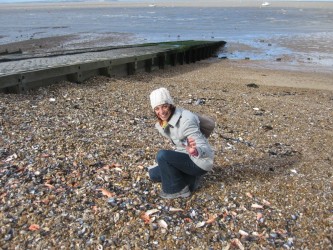