Just back from an epic weekend in Iceland! What’s in Iceland you ask? Beautiful scenery, delicious food, the purest water in the world, and elves (50% of Icelanders believe in them). What’s not in Iceland? Crime, Starbucks and McDonalds. Islanders are pretty proud of that and we would be too. Martin, our young and entrepreneurial tour guide, taught us about Iceland’s Nordic history. We were surprised to learn that Iceland was under Danish rule until 1918 and not formally a republic until 1944, coinciding with WW2. Martin amused us by describing Iceland’s homeland security: three coast guard ships (sitting idle in the harbour), two helicopters (to rescue waylaid tourists) and a mostly non-present police force mostly concerned with building a friend base on Facebook. We had to admit, things were looking pretty idyllic in Iceland (if you don’t mind never seeing the light of day in winter). One of the best things about this country is that it has such a peaceful history and remains a very tolerant and accepting culture. Other things we enjoyed were the exotic language and using a foreign currency (1.00 USD = 132,000 Krona), as Iceland is a non-EU country.

So that was Saturday – touring the capital with Martin and shopping the boutiques for wool products. Sunday was full on, with a twelve hour drive along Highway 1. So many great roads are called “Highway 1” aren’t they? Our destination was the Jokulsarlon Glacial Lagoon, four and half hours away. But this drive was all about the journey, not the destination as they say (though the destination was well worth it). The scenery was constantly evolving. We saw volcanic black sand beaches, snow covered mountains and plateaus, glaciers, lava fields, countless waterfalls, glacial rivers, farms and Icelandic horses. Two-thirds of Iceland’s population lives in Reykjavik so being in the Icelandic outback was like being on Earth before there were inhabitants. It was really a display of Mother Nature in all her geothermic glory. A pressurized geyser or simmering volcano was never too far away.

We loved our visit to this vast and awe-inspiring country – one of the happiest countries in the world and one of our favorite countries to have visited.

For more pictures, check out our Iceland photo album dated 4th May 2015 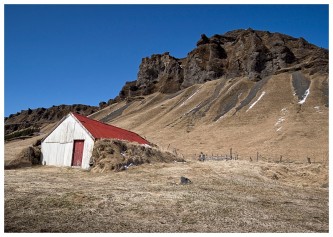