Brent turns the big 4-0 this year! To celebrate, he wanted to attend the Islay Whisky Festival in Scotland (known by locals as Feis Ile). We rented a large house near Kilchoman Distillery. The first half of the trip was us and another couple, Rory (a Scottish man himself) and Anna. The second half of the trip was strictly mancation.

The trip was great fun. We were fortunate to have beautiful sunny weather, which made all the difference. We partook in lots of whisky activities, our favorite day being Sunday at Bruichladdich Distillery. This was a day to remember. Well, it’s unclear how much of it Brent remembers, but he had a great time. Brent and Rory attended the “masterclass” with the head distiller, where 11 drams were enjoyed before noon o’clock. After which, Brent secured his “ledge” status (short for legend) by getting up on the stage and handing out leftover drams to his fellow whisky nerds.

While the lads were at the masterclass, Katie and Anna visited Port Charlotte and Portnahaven, where they sunned themselves on a bluff next to some seals. Later we all meet up back at Bruichladdich, along with 3,000 other whisky enthusiasts, to enjoy a raucous afternoon of whisky, kilts, Gaelic music, bagpipes and traditional dancing. They have a really lovely set up at Bruichladdich – a big open courtyard around the production rooms and warehouses, food stalls, and bands which played inside an open lorry painted in Bruichladdich blue. There were also some lovely arts and crafts vendors, and we purchased a painting by a German who lives on the island part-time, named Dietmar Fingers (henceforth known by the group as Deep Fingers). He thought Brent looked like Robert De Niro. At one point he asked Katie, “Where’s Bobby De Niro?” to which Katie answered honestly, “I have no idea.”

Meeting, scaring and spilling whisky on Joe, a young man with a whisky youtube channel, was a notable part of the day. Also intermittent shouts for “Snaskits!” (Snaskits were invented over drinks the night before. It’s a snack that comes in it’s own edible basket for those hungry times on the go. It’s even eco-friendly as the packaging gets eaten!) Other memorable moments were: 1. Brent making high-wager auction bids; 2. Brent inadvertently interrupting the master of ceremonies. Ledge. Actually, though there were a lot of drunk Laddiefans, there were also lots of children and families. It was a pleasing feel of celebration and community, a sense of place and tradition.

Monday was a bit of a recovery day, mostly cruising around the island, listening to Rory’s work out mix of two songs. The scenery was stunning, and so much wildlife to gaze upon – highland coos, hares leaping by the dozens in the open fields, pheasants, cute little suckling lambs, swallows swooping about. “God’s Country” was an expression often repeated over those few days. Even though it was the busiest week of the year, we felt very secluded in our mansion house. Only a couple miles away was Machir Bay, voted one of Britain’s most beautiful beaches. And beautiful it was. We went there every evening to watch the sunset. Rory and Anna decided to get engaged there. Another night, Brent and his Scottish friend Andy also decided to take the plunge, quite literally, into the cold waters of the Atlantic. At this Anna exclaimed in her lilting English accent, “Why are Andy’s pants (i.e., undies) so small?” Then with a cheeky grin, “Actually, I should be asking, why are they so large?” This still cracks us up.

While the Laddich day was “tits out” the group had plenty of other great moments – cutting peat with Ginger and the gang from Bowmore, a delicious dinner at the Harbour Inn Restaurant and many rowdy poker nights. It was another epic visit to Scotland. Maybe we’ll be lucky enough to go back sometime.

For more pictures, check out our Islay photo album dated 26th May 2016 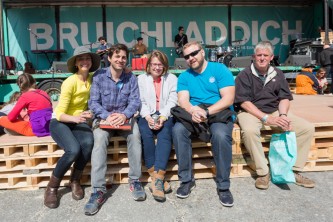