Today is our last full day in Bruges, but this is a city we would definitely like to revisit.  We had an active past couple days. We climbed the Bell Tower (all 366 steps of it), shopped the local market, took a brewery tour, took a canal tour, visited many chocolate stores, picnicked in a local park, and saw a Michelangelo. The entire city is a UNESCO World Heritage Site, so mostly we have been walking the streets and taking in the scenery. We’ve also done our fair share of people watching.

All will be right in the world if tonight, Brent can find a pub that will be showing The Masters….a tradition unlike any other. Note, we already had to watch “the big game” (Man U vs Chelsea) on the third day of our trip. It was a big game, I’ll admit, but Brent uses the term early and often.

Some thoughts so far…..

-Most impressively, this small country has three official languages (French, Dutch, and German), and people here are multilingual.  For example, our B&B owner speaks seven languages fluently, and his wife speaks four.

-You’re probably wondering how we are keeping up with “Lost” (okay, maybe you’re not but here goes….).  Our plan was to watch it on Hulu.com, but unfortunately it doesn’t stream outside of the US.  At a loss, we went to our go-to guy on all things tech related (thanks be for Nick) who reminded us it could be purchased from iTunes.

-We’ve been going to the supermarket to purchase mass quantities of water since it isn’t served anywhere.  Especially in Belgium restaurants, you drink beer or you go thirsty.

-We were expecting high prices over here, but coming from San Francisco the prices haven’t been too much of a shock to us.

-Tissue is not readily available (a problem during allergy season) but don’t worry….Brent has a handkerchief.

-We are getting used to military time, the metric system, and calculating Celsius into Fahrenheit.

Hope everyone is doing well.  Our next post will be from Amsterdam. 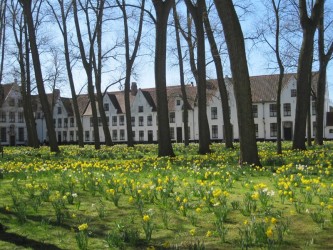