We’re here in Amsterdam, writing this from a canal-side café table. Brent is drinking a beer and just smoked a cuban. Katie is enjoying a cappuccino and a sweet, cinnamony slice of Dutch apple pie. Things are good. Yesterday we took in a little culture…the Van Gogh museum in the evening followed by a romantic stroll through the Red Light District (RLD).

The RLD was even more shocking than we had prepared ourselves for…like going to Bourbon St. for the first time. We walked through the RLD just after dark, when it was primarily a tourist gawking event, but it’s easy to imagine a sleazy late-night scene. We got a kick out of the “ladies” chatting on their cell phones while trying to recruit business.

The Netherlands has as many bikes as citizens, 16.5 million, and you can tell. Instead of looking both ways for cars, you’re constantly looking out for bicyclists. Our B&B is in a nice location for exploring, but the owner is one cranky you-know-what. The first day she showed us around and told us that breakfast would be served across the street (at a neighboring B&B) at 9:30. If we preferred, we were welcome to make our own breakfast in her kitchen. We told her that was our preference, and had her show us around the kitchen.

The next day, we were relaxing with our coffee, when at 9:45, our host barged in saying, “You were supposed to be at breakfast at 9:30! I’ve been waiting for you!” We reminded her that our plan was always to eat here, to which she responded, “Well that was a waste of a meal” slammed the door and left. Brent then started in with the jokes about leaving an upper decker (aka “going up top”) before we checkout.

Needless to say, we are trying to stay out of the B&B as much as possible. Today we walked around the charming Jordaan district (picture quiet canals, curbside cafes, and quaint restaurants).  We also took Southeast Amsterdam by storm. This involved a visit to the Dutch Resistance Museum, an interesting museum about how the Dutch resisted the Nazi occupation.

We were lucky to catch the weekly market and piece together another fabulous picnic lunch of cured meat, fresh bread, cheese, olives, dried fruits, and veges. So far, the farmer’s markets have been a lot cheaper than the ones at home. In Bruges, Brent bought a half rack of ribs and a quail (seriously) for 4 Euros. Today, we bought a block of nice, aged cheese for about half the price of what we would pay at home.

Tonight we are heading to an improv show that our friend Lee (former resident of Amsterdam) told us about. 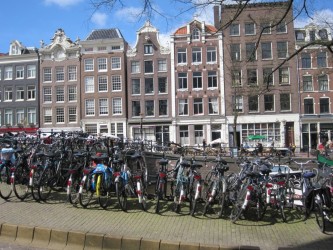