Today we did a side trip to Normandy. This was an excursion we were really looking forward to, and it didn’t disappoint. We did a guided tour of Le Memorial Museum in Caen followed by visits to Gold Beach, Pointe du Hoc, Omaha Beach and the American Cemetery.

We thought the American Cemetery was beautiful, and it seemed fitting that the cemetery overlooks Omaha Beach. One of the things that surprised us was the size of Omaha Beach – the beach itself was much wider (from the ocean to the bluffs) than we expected, and it stretched over four miles long – a huge area for troops under attack while trying to get ashore.  Today, the beach is so peaceful and quiet. To stand on it, it’s almost unbelievable that this was once the site of such a gruesome battle.

On the bluffs are old bunkers with artillery still in place. You can also see remnants from the artificial ports that were built. At Pointe du Hoc massive craters in the ground from the bombings are still there and you can walk in them. At all the sites you can walk around freely and go into the bunkers.

The father of a lady in our group was one of the soldiers who landed on Omaha Beach on D-Day. Her dad is still alive (91 years). It was very emotional for her to visit these sites, and it was really cool when she called her dad from the beach.

It was a lot to absorb in one day but something we were definitely glad we did.  It also gave us a renewed appreciation for the sacrifices made during that time.

We’re writing this on the train home and will be back in time for some late night eten-an-da-drinken in Paris. 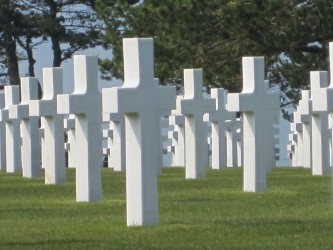