We’ve been in Provence a couple days now. We are staying in Marseille, the second largest city in France (after Paris). We were really looking forward to being here, but we’ve had a rough start so far.

Our apartment isn’t exactly what we envisioned. It’s amazing what can be done with online pictures. Its quite “rustic” and we have friends (bugs). To make matters worse, there is no wifi, as advertised, which has put a damper on our blogging and skyping. It isn’t in the best neighborhood and is located up a very twisty and sloping road (like Lombard Street but longer and narrower– video coming soon). Despite our initial disappointment with the place, it does have a nice terrace, and we have already enjoyed a couple homemade meals under the stars.

Our plan for our first day here was to see a doctor, since Brent has been fighting an awful cough. Seeing the doctor here was definitely an experience. First of all, it was 10:00 in the morning when our host tried to make an appointment. She called three offices, and none of them were open yet. Eventually, we got an afternoon appointment. Since we had a few hours to kill, we walked around downtown Marseille. At noon, we stopped by the doctor’s office to see if he could see Brent earlier. His receptionist told us he didn’t get in until 3:00 (must be nice doc).

We got to the office 15 minutes before the appointment (Katie was thinking we’d have to fill out some paperwork). We had no idea what to expect or how much it was going to cost. There was no paperwork, no handing over of insurance cards, no HIPPA forms, no copay.  We’re used to seeing our doctors in nice clothes and a white coat. He was in jeans. Since he spoke limited English, describing the symptoms was like a game of charades, “Okay doc, three words. First word… sounds like…”

The exam was brief. Brent had exacerbated symptoms from pollution and allergies. Doc prescribed three drugs. Then he said, “You pay here.” We were confused. “At reception you mean?” No, pay the doctor directly, in the exam room. The bill was 20 Euros (same as our copay at home). The cost for three medicines was just over 10 Euros. Pretty incredible. The experience couldn’t have been easier, and we were pleased with the doctor. Let’s hope Brent starts feeling better soon. 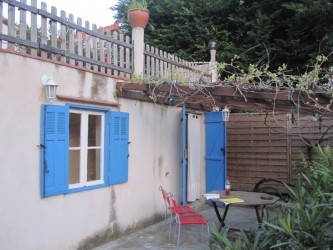