Time is really flying. We’re already leaving Barcelona for our next stop, Valencia. The Spanish way of life is easy to love…lazy mornings, afternoon tapas, siestas, more tapas, and 11:00 dinners. We think we’ve done a fairly good job of embracing it.

Everyone who goes to Barcelona walks up and down the Ramblas, which is the main boulevard. We did this a few times (day and night), and while we enjoyed the people watching, it is apparent that this has become much more touristy over the years. We read, and it appears to be true, that a lot of fast food joints and souvenir shops have replaced the original cafes and bars that gave the street its charm.

It was very rainy for most of our visit. Fortunately our first day was sunny and that was when we did most of our walking around. We made a point to see Gaudi’s Sagrada Familia, a church that was started in 1882 and is still unfinished. Gaudi may have made a name for himself with his unconventional style, but it wasn’t our favorite. After visiting several of his buildings, we began referring to him as Gaudy.

The highlights for us were La Boqueria market and watching FC Barcelona futbol. La Boqueria is a covered market and (due to rain) we ended up spending a lot of time there. It turned out to be a great place to have multiple meals (our favorite place for tapas) and to sample the local cuisine. Brent got his fix of the jamon iberico (like prosciutto but more oily and salty). The Spanish are passionate about their jamon. There are so many different types and with a wide range of prices. One we sampled cost $120/lb.  It was delicious, but come on..it’s ham people.

We were really excited when we found out FC Barcelona had a home game while we were in town (vs Tenerife). Our concierge helped us get tickets, and we hoped the weather would hold out. It poured, which was fun to watch, and luckily our seats were in the covered section.

As expected, it was amazing to watch the skill of these athletes. They seem to have eyes in the back of their heads and almost never make a bad pass. Part of the fun is all the chanting and singing throughout the game, and we did our best to join in. The crowd actually bows down to the great Messi (arguable the best player in the world right now) whenever he scores, which was twice that night. Barca won 4-1.

One thing we found interesting was that even though futbol is such an event here, the stadiums are still fairly basic compared with our pro sports stadiums (NBA, MLB and NFL). They have small TVs up, but all they show is the score – there’s no instant replay, no stats on the players, and the game clock isn’t visible from most of the seats. It’s not all gimmicky and distracting. People come to the games because they love, and understand, the sport (very similar to football in the South).  They don’t need a jumbotron to tell them when to cheer and when to get excited.  Another great thing about futbol is the pace of the games: two 45 minutes halves with no timeouts.  The entire game lasted two hours (as opposed to our football or baseball games which last up to four hours).

Overall, we both liked Barcelona and look forward to visiting again.

For more pictures, check out our Barcelona photo album dated 5th May 2010 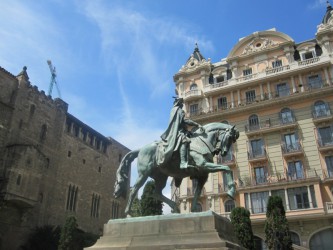