We just wrapped up a two-day visit to Valencia. Coming from the bustle of Barcelona, it was a nice change of pace to be in a smaller city. We really liked the old center as well as a newer neighborhood where we had ourselves a little tapas crawl the first night.

While we were never mistaken for being French, Belgian or Dutch, so far many people have taken Brent for a Spaniard. We think it’s because of the beard. We’re curious if people will still think he is Spanish when the beard goes to just mustache (aka, crumb catcher) in Sevilla.

Unfortunately, the second day we were feeling under the weather, so we didn’t do much. We did make it out to the beach to have paella (traditionally served only at lunch) at the place where it all started.  After lunch, we were admiring a sandcastle when the builder/bum offered to take a photo of us with it. We took a chance and handed over our camera. We thought we were going to have a Clark Griswold moment when he kept backing up with our camera saying, ”Its better if I take it from back here” and eventually hopped over the concrete wall that separated the beach from the sidewalk.

Obviously, when you’re on the road for so long, every day can’t be the greatest. That afternoon, we laid around feeling sick and tired and catching up on Lost. In our room, we pieced together a dinner of pistachios, dried fruit, and leftover cheese. We still managed to stay up past midnight trying to figure out the dialogue of  “Love Wrecked” a cheesy teen movie that was dubbed over in Spanish.

We really liked Valencia even though we probably didn’t enjoy it to the fullest. After a lot of consideration, we decided our next stop would be Sevilla, which is supposed to be great, but a long way from Valencia…eight and half hours by train.  We figured more naptime on the train couldn’t hurt.

For more pictures, check out our Valencia photo album dated 7th May 2010 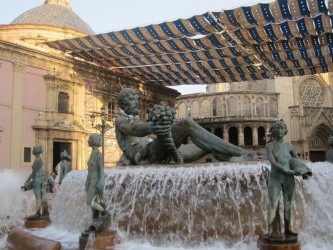