Cable cars, steep hills, hidden staircases, and a Golden Gate Bridge….no, we’re not in San Francisco, we’re in Lisbon! We finally made it here after being stalled for two days due to volcanic ash, but we’re glad we stuck with the plan to visit Portugal…we’re loving it.

Except for pickpocketers, Lisbon is a very safe city with little crime.  We’ve spent most of our time walking around the different neighborhoods. There are lots of big plazas, government buildings, and hotels in the lower part of the city. Surrounding this area, there are several big hills, which can be reached by funiculars, cable cars, or an elevator (or walking if you’re up for it). The upper areas are very neighborhoody, with narrow, winding streets and stacked homes with laundry drying from their balconies.

One of the things that struck us about Portugal was the friendliness of the people. For example, we went to a pharmacy to get some medicine for Katie’s cold…the pharmacist spent a good 15-20 minutes with us, asking Katie about her symptoms and listening to her cough. After writing out a 3-day drug regimen, she asked us what our plans were for the rest of our visit. She then proceeded to spend another 15-20 minutes writing a detailed agenda for a day trip to Cascais, a nearby beach town, complete with train departure information, expected costs, and a seafood dinner recommendation over the water (we followed all her recommendations, and it worked out great). Many people, like cab drivers and waiters, would strike up conversation and tell us that they hoped we liked Portugal and would visit again. Maybe everyone is just being nice because they’re in a recession and are happy to have some tourists, but we felt it was genuine.

We must also admit that one of the reasons Lisbon has been so agreeable was that we splurged on a very nice hotel. During our research for the trip, we came across this hotel that had almost to-good-to-be-true reviews and had decided to make this our splurge. We were really glad we did because the hotel exceeded our expectations. It also came at a great time since Katie still wasn’t feeling well, and it was a nice place to relax and catch up on sleep.

The customer service was incredible. The concierge, Pedro, was like our own personal assistant for the week. He did everything for us from lining up our meals and entertainment to arranging for a rental car (which was dropped off to us at the hotel). We would walk into the hotel from a day of sightseeing and Pedro would say, “Tonight I had in mind for you…” and proceed to rattle off his plans for our dinner, as if he’d spent the whole day with nothing better to do but come up with an awesome night for us.

Brent started calling the concierge Stan, in reference to the Seinfeld episode where Kramer gets a caddy named Stan, who not only turns Kramer into a scratch golfer, but also starts making his day-to-day decisions for him. For example, we had planned to take a day trip to Obidos by bus, but Stan said, “You really should go by car – it will be a much more comfortable trip.” And he was right. It was a much better option because we were also able to visit Sintra, another town outside Lisbon. Needless to say, the hotel was a nice splurge that we really enjoyed and appreciated.

The two day trips we made were both well worth it. Obidos is a perfectly preserved walled city that dates back to the 11th century. All the buildings are white with the typical Portuguese strip of color lining them – delightful to look at and a peaceful town to walk through. Sintra is another small town, which is visited for its castle ruins and its bizarre and colorful palace, built by King Don Fernando II as a summer residence in the 19th century.  The palace is built on the top of a mountain, providing amazing views.

We were originally planning to go to southern Italy, but the weather hasn’t been cooperating, so our next stop is the Umbrian countryside.

For more pictures, check out our Lisbon photo album dated 17th May 2010 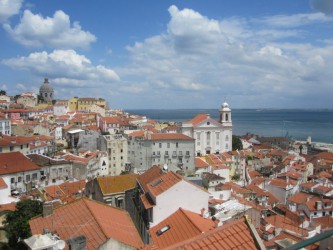