We finally found ourselves affected by the volcanic ash. Our plan was to train it from Sevilla to Madrid then fly from Madrid to Lisbon that same day. This would be our first experience flying EasyJet, the super discounted European airline. At the Madrid airport, we were told that all flights to Lisbon (and many other cities) were cancelled due to “volcanic disruption.”  We had no idea the ash was still affecting flights.

Obviously we were disappointed. They couldn’t tell us when we would be able to get to Portugal, but they recommended we try again tomorrow on an evening flight.  Then the good folks at EasyJet did something that we couldn’t believe. They offered to put us up in a hotel for the night and provide us with all our meals until we checked out.  Pretty much out of options, we decided to wait it out one day and take them up on their offer.

Waiting for the hotel shuttle, we were expecting Motel 6 type accommodations at best. We were shocked when we pulled up to a very modern, business class hotel with all the amenities. Lunch that day was a three-course meal (it was a pre-fixed meal, but still…not bad considering it was free). And the hotel was full of people like us that were staying compliments of EasyJet. Since our tickets to Lisbon (like all EasyJet tickets) were ridiculously cheap ($90 each), we can’t see how this is a good financial move for the company. Especially considering that the reason for the flight cancellation was out of their hands, and many people were stuck for multiple days, for which EasyJet was footing the bill. So far, two thumbs up for EasyJet.

By the way, watching people sit down for a comped meal is really something. At the breakfast buffet, the young couple next to us had no less than nine pastries between the two of them. That’s in addition to the cereal, yogurt, jamon, eggs, toast, and sausage, mind you. We couldn’t help but survey the EasyJet clientele and joke that this was probably the best eating most of these people had their whole trip. The flight cancellation might have been the best thing that happened to some of these people, trading in hostels for three star hotels.

Anyway, since we had the late afternoon free, we did a serious blitz tour of Madrid (4 hours). The city seemed so wealthy, with many parks, fountains, and plazas. We also finally had our first go at sangria in Spain, which hit the spot for both of us after a long day.

The following day we waited around until 4:30 before we found out that our flight was again cancelled. We decided to hop a train to Toledo for the night to check it out. Toledo is perched on a hill and surrounded by a river and there are no modern buildings. Since we arrived late in the evening, the town was extremely quiet. Supposedly, the expression “Holy Toledo” comes from this place because it was considered to be the most holy Jewish city in Europe, but we found ourselves saying “Holy Toledo” quite a bit as there seemed to be a church around every corner.

For more pictures, check out our Madrid photo album dated 12th May 2010 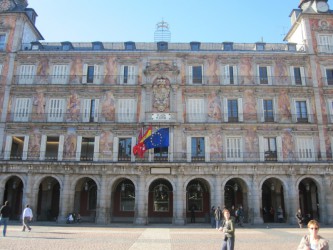