This week Brent had a conference in Barcelona so we flew in early for a long weekend. The last time we were there it was rain, rain, rain, but lucky for us this time it was your ideal, warm, Spanish climate. Saturday and Sunday came and went fast…visiting our favorite tapas bars and strolling the streets. We sat for several hours at one of our favorite tapas spots at a table outside in a square called Placa de Santa Maria, gazing at a gothic church and drinking rose wine (and white wine, and red wine). Actually, we sat so long that we had the pleasure of watching the same street performers coming through twice. They didn’t change their shtick at all…two original songs followed by a rousing rendition of the Eurythmics, “Sweet Dreams Are Made of These”, which they claimed was a sing-a-long.

Later we discovered a new part of town for us, the Born, which had lots of restaurants that are popular with the locals as well as great nightlife (and nightlife it is when dinner doesn’t get started till 11:00). The next couple days while Brent was hard at work, Katie did some more site-seeing, getting up out of the touristy zone and into a couple neighborhoods called Sarria and Gracia. These districts used to be independent towns before they became part of Barcelona and they have more of a village atmosphere, with traditional shops and not even a lick of English being spoken, so they were a rather refreshing discovery. 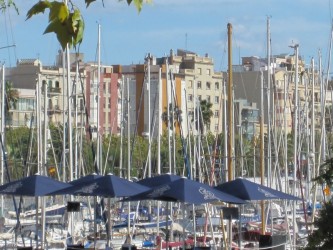