We had been interested in going to Dublin for a while and figuring we needed some new material for the blog, we decided to make a quick weekend visit. Unfortunately, our departure was delayed from Friday to Saturday on account of a shameful scam by Ryanair, but don’t get us started on that. Let’s just say we have sworn off that airline for good.

Once in Dublin (or “Dooblin” as we like to call it in our best Irish brogue), we had a magnificent time. Dubliners are so friendly and chatty and this is quite different from Londoners who (to generalize) prefer to keep to themselves. We enjoyed the spirit of the city and the spirits of the city (Jameson whiskey for the most part). We did the requisite tour of the Guinness factory, which though touristy was really well laid out and the views of Dublin from the Gravity Bar can be good on a nice day. Also, we had heard so much about Temple Bar, the lively area for nightlife, so we went there later. It was even more crowded and touristy than we expected. But it was also very fun with so many restaurants and pubs – almost all of them featuring live music at some point in the night. Again, we couldn’t help but compare this to the scene in London, in which pubs rarely play music or dim the lights and closing time is strictly observed at 11:00.

On a friend’s recommendation, we took a short train ride out to the coast to a little town called Malahide.  After we walked around the town and harbor (which took all of 30 minutes) we made our way to Malahide Castle for a brief and interesting tour. The castle had been in the same family for 800 years and was still lived in until about 30 years ago. We thought that was crazy since it was definitely very much a castle with old fashioned furnishings and medieval, drafty rooms. Not the type of place most people call home these days.

Back in Dublin, we thoroughly enjoyed a couple of hours at The Brazen Head, Ireland’s oldest pub (www.brazenhead.com). Here, we were lucky to catch some locals playing traditional Irish music with instruments like the bodhran drum and spoons. The regulars took turns getting up to sing old favorites – some sad Irish ballads, some silly drinking songs and all good. Whatever the song, the whole room would join in and sing along. It was an experience to remember. Cheers to the Irish! 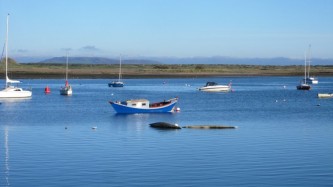