Canals, bikes and a laid back culture. What’s not to love about Amsterdam? We had an opportunity to revisit the city last weekend and enjoyed every minute of it. We stayed in our favorite area, the Jordaan, which is the perfect combo of neighborhoody and trendy with lots of great bars, cafes and boutiques.

While Brent spent some time working, Katie took a day trip to Delft, a small Dutch town about an hour outside Amsterdam by train. Netherlands has to have one of the most efficient train systems in Europe so it’s very handy to get out and see other parts of Holland. It’s also helpful that everyone here speaks English – to the point that at the airport there are no signs in Dutch – it’s all English. As usual, we are very impressed by the multilingual locals.

Delft is like a miniature Amsterdam, very Dutch with little canals, pretty churches and a central square lined with eateries and shops. Delft is best known for two things – Vermeer and Delftware. While there, Katie visited the Vermeer Museum and a Delftware factory to see how the famous blue pottery is made and hand painted.

We were lucky to have one of those glorious, sunshiny days on Saturday so spent the afternoon cruising on bikes along the canals and side streets. We spent a few hours sitting outside of the Amstel Hotel, at a table smack-dab on the Amstel River, drinking rose, soaking up the sunshine and watching the boats pass.

Amsterdam might be one of the best places in the world to be on a sunny day. The locals come out in droves – cruising the river in their boats or docked along the canals so friends can come and go. They bring their dining room tables outside and sit all day along the canals eating and drinking (“eten and drinken” – see Amsterdam post from April 13, 2010). They hang on the bridges, hang on their balconies, hang on their front steps. Even after the sun goes down, people stay out enjoying their city and their friends. 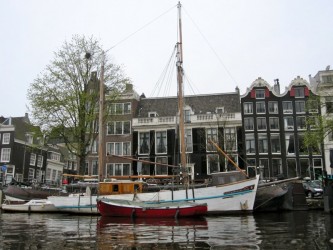