It was a long haul from London to Puerto Rico (12 hours flying time) made longer by the fact that we missed our connection and had to spend the night in Philadelphia. Air Force One was landing at the airport at the same time we (and many others) were supposed to, disrupting hundreds of people’s travel plans. We think Obama may have lost a few votes with that move. Needless to say, we were glad when we finally made it to the sea and sun.

We were in Puerto Rico with Brent’s coworkers as part of his company’s sales reward trip. No crazy stories from our camp…just the usual tropical island vacation indulgences – relaxing by the pool, drinking Miami Vices and staring out at the blue, blue ocean. One day a group of us went into Old San Juan (“Old San Juan the way it once was”), a cheerful historical center with brightly painted colonial buildings, a handful of pretty squares and narrow streets of blue cobblestone. Later that night, we found our way to a bar with live Caribbean music and salsa dancing locals.

On Saturday, Brent was able to catch part of the Masters…a tradition unlike any other. Viewing conditions were similar to last year – the ball barely visible on a non-HD TV, but a Puerto Rican cigar, cold Medellas and the company of friends made it all good. 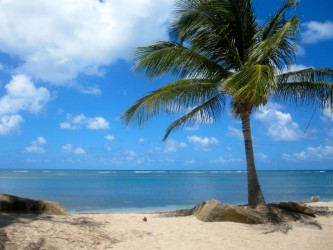