Instead of sticking around London for the royal wedding we decided to take advantage of back-to-back four-day weekends and headed off for more European travels. First stop was Budapest (pronounced Budapesht we learned). It was the first time either of us had been to Eastern Europe (apparently a descriptor that is on the outs so pardon us). We had heard good things about Budapest and rightly so. It is a very pretty city (except for a handful of communist era buildings here and there), with lots to do and delicious food. They still use their own currency, the Hungarian Forint.  At the time of our travels 1.00 USD =  182.15 HUF. Brent enjoyed flashing his 10,000 forint bills around like he’d just come back from the casino.

The two main sections of town, Buda and Pest, are divided by the mighty Danube (or “damn you” as we liked to call it). We stayed in Pest, east of the Danube and Chain Bridge, which is bigger with more going on. We really liked our location in Pest, which was close to the metro (pretty necessary for getting around in this spread out city), Andrassy St (a classy shopping boulevard) and lots of parks, squares and restaurants.

Smaller Buda is packed with historical and cultural sites and lovely views of the Danube and the rest of the city. One of our favorite spots was the terrace of Fisherman’s Bastion on Buda Hill. We spent an afternoon there at a table overlooking the Danube and the Parliament building while drinking the local wine and listening to traditional Hungarian music. Oh and while we pretty much like any and all wines, Hungarian wines are definitely something special.

Part of the charm of Budapest was the Hungarian language, so unlike anything else we’ve ever heard. Square are “ters” and streets are “utcas.” By the end of our visit, we were adding utca to the end of every sentence because it’s fun to say. The easiest word to learn was “szia” (pronounced SEE-yah) which is both hi and goodbye, so you just had to remember to think “see ya” in English every time you greeted someone and they’d think you were very clever.

We did a lot in three days, including a day trip to a smaller traditional Hungarian village on the Danube Bend. But maybe our most interesting experience of all was partaking in a Hungarian bath. Of the two most famous baths in Budapest, we opted for the Szechenyi Baths because they are supposedly more casual and popular with the locals (“the people’s baths”). Even though we had the sage advice of Rick Steves to guide us through the process, it was definitely not an intuitive procedure. Communication barriers with the staff was one obstacle, coupled by the fact that we had no small change, which prevented us from doing anything useful like rent towels or buy a drink. After 15 minutes of scratching our heads and walking in circles, we managed with the co-ed changing cabins, the wristbands, the computerized lockers and the showers. All well worth it for an afternoon relaxing in 104°F water with all sorts of jets, sprays, currents and bubblers. And if the number of pot-bellied men in a tiny, black Speedos is any indication that you’re bathing with the locals, then we were definitely in the right spot. 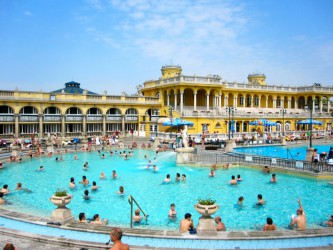