After our travels to Budapest and Vienna, we can’t imagine a better way to finish off our vacation than by the beautiful Italian Lake Como.  There’s not much activity in these little Italian towns. It was all about slowing down…serious unwinding, stunning views and Italian food. We made Bellagio our home base but also made a jaunt over the water to the nearby town of Varenna. We liked Bellagio – plenty of sunny terraces for alfresco dining and aperitivos.

About the only thing we did was take a water taxi tour of the lake. This was a great way to jet around and admire the views from the water. Our tour included one of the great villas in the area (no, not Richard Branson’s mansion – though we did see that too). We’re talking about Villa del Balbianello, a property that showed us how the other half lives. The guy had three rooms just for his map collection. But since we brought up Richard Branson…. yeah he has a house on Lake Como that he rents for 250,000 pounds a week (apx $400,000). Stupid money is what that is. We’ll just take two weeks.

Can’t complain about the food – since we’re talking about Italy it has to be covered (it usually is anyway). First there was Silvio’s restaurant…Silvio being the only villager with fishing rights on the lake in the area. The man goes out every day for the fresh catch. We saw him when we were on a walk one day, out with his dinghy and net. We thought that was really cool since we had reservations at his restaurant that night, though we wondered what on earth he could be catching with that equipment.

Our favorite dining experience was on another night. It just seemed so perfectly Italian. Our hotel booked the reservation for us and arranged for a driver since the restaurant was slightly out of town. We were thrilled when chef Luigi himself drove out to pick us up. On the way, he spoke passionately about tending the garden that morning to pick vegetables for the evening’s menu. He seated us personally and walked us through the menu, describing each dish with intense emotion. Once seated, we watched him slaving away in the kitchen next to?….his nonna of course. He visited us after each course to see how we were coming along. (At this point, you may be having the impression that he had mistaken us for VIPs, but this was just his way with all the guests.) The meal was delicious and afterward we asked the waiter to call us a taxi. A few minutes later, we were told the taxi had arrived. You can imagine our delight when we approached the car and realized…it was Luigi! Willing to leave his post in the kitchen to drive us back to the hotel. He was too much. 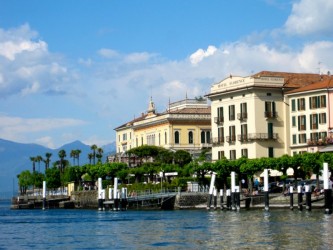