Since we’re starting to appreciate the fine world of whiskies, we decided to take a weekend up to the Malt Whisky Trail in Speyside Scotland. We chose Speyside because we like the style of whiskies from this area, and also because this region of the Highlands is where half of all Scottish distilleries are located.  The region is known not only for its distilleries, but also for salmon fishing, hiking, and castles. The area was absolutely beautiful – rolling, vibrantly green hills dotted with sheep and highland cattle, and at this time of year the days are long –  drawn out until nearly 11pm.

Over the course of four days, we visited five distilleries (Glenfarclas, Macallan, Aberlour, Glenfiddich and Balvenie) and one castle. We loved how the malt smelled like bread baking as we walked through the distilleries. Typical distillery tours are about two hours, taking you through the entire production process and finishing up with a tutored nosing (fancy talk for tasting). The tastings usually consisted of about six full drams of whisky (Brent was always proud to be the only one having completed all his tastings).

Knowing very little about whisky itself and the production process, we learned a lot over the course of the weekend. There is so much involved in the whisky making process, from malting the barley, to fermenting, distilling and aging. The distilleries take great pride in their long history of tradition, their purity of ingredients and their sustainability. We really have a better appreciation for it all. We also visited the Speyside Cooperage, the only working cooperage in the UK. The coopers apprentice for four years. Imagine training as long as a doctor, to learn how to repair and remake casks.

We enjoyed being in Scotland, even though we can’t understand the Scots very well. The Scots are funny people…like when the guy at Enterprise apologized for running out of stick-shifts and hoped we were able to drive an automatic. We were constantly butchering Scottish pronunciations. Turns out Glenfiddich is pronounced “glenfiddy” with “glenfiddik” also being acceptable. Then there was Brent’s Scottish breakfast. Let’s just say there was a slight mishap when we ordered. It came as follows: pork sausage, unsmoked back bacon, grilled tomatoes, sauteed kidneys, regional black pudding, haggis, mushrooms, baked beans, regional fried bread and potato scone. Unfortunately we didn’t take a picture of it, but the chef did, having never prepared such a large breakfast in his career. Other regional specialties are toasties and tatties (heads out of the gutter – tatties are potatoes).

We really enjoyed our whisky weekend and the warm hospitality of the Scots! 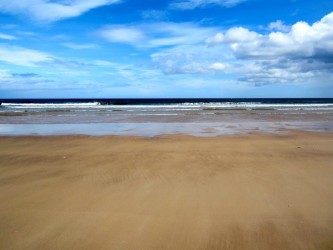