On the way to New Zealand we had a two-day stop over in Hong Kong. It was the first time to Asia for both of us, and we were excited to take the city by storm. Here are some of the highlights:

-Taking the Peak Tram to Victoria Peak, the tallest hill on Hong Kong Island. Back in Victorian times, the peak was the best place to escape from the heat and became an exclusive getaway for the wealthy. The tram was constructed in the 1800s, and cut journey time up the hill to 8 minutes (previously 3 hours by sedan chair). We took the hour-long stroll around the peak and admired the spectacular views, which can be summed up in one word…skyscrapers. So many skyscrapers – stretched out like some miniature Legoland city as they disappeared into the distant haze – their sheer height and quantity having earned Hong Kong the appropriate nickname of “the vertical city.”

-Staying at the W in Kowloon, across the harbor from Hong Kong, which afforded us magnificent views of the skyline and harbor, something we especially enjoyed at nighttime over dinner and drinks (lychee martinis). Thanks to mom and Michael for the generous gift of luxury accommodation, especially appreciated after a 12-hour flight!

-Taking in the seemingly unending examples of contrast in Hong Kong – modern skyscrapers and luxury shopping meets bamboo scaffolding and ancient temples. Walking in a park in the heart of the city’s financial center, surrounded by steel and concrete, we watched an elderly group practicing tai chi and city workers sweeping with bamboo brooms.  Later, while exploring the Western District, we passed a group of Chinese men on their lunch break, slurping soup under the makeshift tents of street hawkers, while across the street trendy boutiques and high-end cupcake shops were more of a Greenwich Village vibe.

– Roaming the streets – especially the Western District. For us, it was like being on Stockton Street in San Francisco but on a much larger scale. This is where you find street after street of small, specialty shops dealing out everything from Chinese herbs to dehydrated scallops. Seriously we saw (and smelled) it all – every type of dried and salted marine animal, not to mention snakes, skewered rats and the ever-popular “sea cucumber” (sneaky menu speak for gigantic, black sea slugs). You can find it all here – just let the street name be your guide (“Ginseng and Bird’s Nest Street”).  We’ll never forget passing one place – a small warehouse with prominently posted “no photo” signs, where men were sorting dehydrated shark fins (a controversial delicacy) on the floor, and stacking them into massive containers – must have been a couple hundred thousand shark fins, and it was awful to see them like that.

-Dining at Temple Street Night Market. The market itself was not our cup of tea – lots of cheap, plastic goods like iphone covers and chintzy souvenirs. But the atmosphere was buzzing and everyone was out eating dinner on the street. Here is where we had our first and most adventurous dining experience. The gruff waitstaff (if you can call them that – they barely had time for us) didn’t speak English and we didn’t know what the protocol was. Eventually we were pushed over toward a table where we took a hasty stab at ordering and kept our fingers crossed. It was pretty much a free for all…dirty, sticky tables and surly service but the food was delicious. No napkins, but some tables were lucky enough to have been supplied with rolls of toilet paper (not us).

-Not necessarily a highlight, but we couldn’t believe all the shopping in this city – and coming from London we’re used to a lot of shopping stores. Everywhere you turned there was another department store. Even our hotel was located within a massive shopping center. It was impossible to avoid them.

-On our last night we had a great meal at Hutong, a restaurant on the 27th floor and overlooking Hong Kong’s skyline. After dinner and drinks we checked out a karaoke bar, Cloudnine, which was filled with locals. One thing that stood out was the popular drink of choice; Whisky on the rocks! The common thing was to buy a bottle of whisky for the table for sharing. The table next to us, which consisted of two young professionals, ordered a bottle of Macallan between them, and proceeded to drink the entire bottle over the next few hours without the slightest hint of being drunk. This was happening at every single table, except ours. The Hong Kongians love to drink! We were curious what the local version of the happy birthday song was so Brent convinced a table of eight guys to sing it to Katie (it wasn’t her birthday). The entire bar joined in and it was quite entertaining.

We both really enjoyed our short stay in Hong Kong.  Two thumbs up. 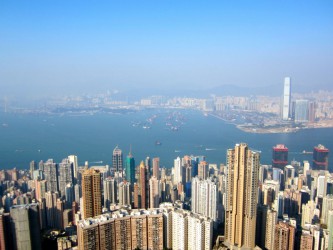