We were greeted by New Zealand with a beautiful afternoon in Wellington. “Windy Welly” it is known as, and rightly so. An interesting note about arriving into Wellington – we were floored when we exited the plane and people were waiting at the gate to greet their loved ones. Apparently this is allowed on domestic flights (we had connected from Auckland), but still – haven’t seen that for years. And with that, we knew we were in for a real nice stay here in New Zealand, where they’re just not too uptight.

That afternoon we walked around Wellington for a few hours, taking in the sights (there’s not many) but it’s very compact and easily walkable. We spent some time on Cuba Street, which has a number of bars and restaurants. Wellington is supposed to have a great coffee culture, and after a 14 hour flight + connection + second flight, we could have certainly used the pick-me-up. Oddly, all the coffee shops were closed at 5:00, except Starbucks that is. I guess you have to hand it to the big chains sometimes. Eventually (the next morning at breakfast) we did try a “flat white” – the kiwi coffee drink of choice par excellence. We made our way over to the waterfront, which was alive with happy hour drinkers reveling in the late afternoon sun. And from there, we visited the Occupy Wellington site, which wasn’t too impressive.

We only had a day in Wellington – the next day we we’re off to the South Island for some R&R amongst the vines. Before leaving though, we did take the Wellington cable car up the hill to the Wellington Botanical Gardens, which is when we realized that Brent was going to be in for two long weeks of allergies now that we’ve time travelled from winter to summer. 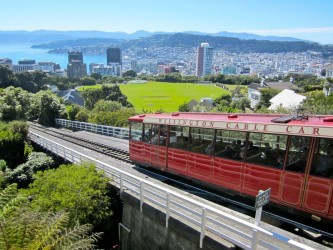