From the wine country we set off for Kaikoura, a beach town on the east side of the South Island where we planned to go whale watching and celebrate our Kiwi Christmas. It was a scenic drive to Kaikoura and reminded us a lot of California (coincidentally, both have coastal roads called Highway 1). About 20 kilometers outside of town we pulled over for lunch at Nin’s Bin, an iconic beachside caravan known to be one of the best spots to eat for it’s fresh crayfish (aka lobster) and stunning views. We picked our crayfish victims and enjoyed a delicious, simple meal al fresco on a piece of driftwood (a bit of a balancing act with our plated crustaceans). Brent had butter beard the rest of the afternoon.

Kaikoura is sort of your typical, low-key beach town with predictably alarming establishments like a motel called “The Lazy Shag” (interesting) and a coffee shop called “The Why Not Café” (I’ll tell you why not). Not too much in the way of bars or restaurants, but the natural setting is striking – clouds suspended above turquoise water, animals out to pasture on nearby hills and snow-capped mountains surrounding it all.

Kaikoura sits on a peninsula and is renowned for it’s marine life due to it’s unique proximity to a deep offshore trench – one that reaches depths of 5,000 meters as close as 16 kilometers from shore. Whales love to come to this region to feed off the many deep water species and since it’s rare to find such sea creatures so close to the shore, the thing to do when you come to Kaikoura is whale watch.

While we were waiting for the whale watching excursion to begin, we enjoyed watching a couple of fishermen who had zeroed in on a massive school of salmon along the shoreline. There must have been hundreds of fish swimming just below the surface and every time the line went in, a fish was hooked. It was, as they say, like shooting fish in a barrel. One of these fisherman offered to let Brent have a go and next thing you know, he was reeling in a two-footer like it was no one’s business.

Now there’s no guarantees when you go whale watching, and it ain’t cheap so we were really hoping it was a worthwhile venture. The captain uses an underwater microphone to listen for “clicks” that the sperm whales make to communicate and navigate. If the clicks got quieter, we’d gun it to another spot and listen again. Over the course of two hours, the crew managed to track two whales and we felt very lucky to have two whale “encounters” as they call them, plus the company of a couple leaping dolphins and some rare albatrosses (whoop-de-doo).

The next day was Christmas, although it certainly didn’t feel like it here. It’s odd to have traveled from winter to summer. It was a little disconcerting, having just come from winter in London, to find that cherries were in season and Brent had raging allergies. In the same way, it didn’t feel all that Christmasy as there weren’t a whole lot of holiday decorations up and we were enjoying sunny weather at the beach. It seemed more like the 4th of July, with many families out grilling in their backyards and taking up the sunshine. Our day consisted of a three-hour hike around the peninsula, where we explored tide pools, met some abalone divers and bumped into a few seals. As the Kiwis say, “Sweet as.” 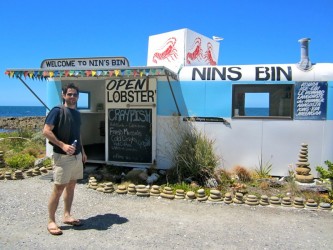