After our Kaikoura Christmas, we concluded our stint in the South Island and headed back via ferry to New Zealand’s North Island. There we were met by our Kiwi friends Steve and Renee, who have been gracious enough be our hosts and tour guides for the remainder of our trip (not to mention they gifted us a new little companion for the trip, an All Blacks kiwi bird hereinafter known as KB).

Our first stop was an evening at Renee’s family home in Raumati, where we enjoyed that famous Kiwi hospitality and a delicious lamb dinner. We also had the pleasure of meeting Renee’s dad, who had recently been awarded knighthood by Her Majesty The Queen. His title is: The Governor-General and Commander-in-Chief, Lieutenant General The Right Honourable Sir Jerry Mateparae of New Zealand. Mr. Brent Boswell sounds pretty basic after that.

The next morning we set off early for a drive up through the North Island. We passed a number of small rural towns, the quirkiest being Bulls, which likes to play up it’s name with signs like “Consta-Bull” (police station) and “Collecta-Bull” (antique store). Pretty horri-bull, but in a funny way. We also made stops to the New Zealand National Army Museum, Lake Taupo and Huka Falls, followed by Huka Prawn Park for lunch and a couple rounds of killer prawn golf.

Rotorua (known by some as “Rotovegas”) has loads of activities for those of a more adventurous spirit. We spent a day at Agroadventures, where we watched the brave of heart bungee jumping, swooping and zorbing. Brent and Steve dabbled in the shweeb, racing each other on a bicycle monorail of sorts. Later we ventured over to Skyline Rotorua, where we took the gondola up the hill and enjoyed panoramic views of Lake Rotorua. After a long wait, we did a luge ride down the hill – Brent and Steve scooting down the beginner’s track and Katie getting passed by young ones on the intermediate course. Yeah we’re crazy.

Rotorua is known for it’s rich geothermic activity. Steam floats out of the ground in random spots and the air carries the unmistakable funk of sulfur. It is due to this geothermic activity that Rotorua has long been revered by the Maori (the native Polynesian people of NZ). One of our favorite experiences in Rotorua was a Maori cultural evening, which involved a performance of warrior rituals and poi dancing, as well as a traditional hangi dinner (meal of chicken, lamb, potatoes and sweet potatoes all slow-cooked in an underground pit). The evening also included a guided night walk through the bush, where we saw glowworms and the elusive kiwi bird (that is, after extinguishing our “torches” – kiwi speak for flashlights). The poor kiwi bird – now here’s a creature that’s had to overcome a number of shortcomings… It’s a flightless bird that can’t jump a one-foot high enclosure. Shy and nocturnal, it’s eyes are so sensitive to light that the flash of a camera may stun it for 3-4 days. Symbols of New Zealand, they are endangered and protected. We were glad to have seen the little spiky-haired creatures. 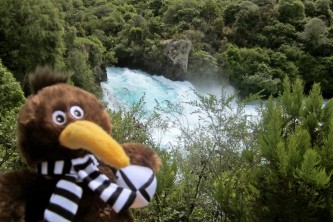