Just returned from a sun (and allergen) filled weekend in Berlin, the capital of cool in Germany. We were thrilled with our hotel in the Prenzlauer Berg district – a leafy, family friendly neighborhood with tons of restaurants, cafes and bars. Also, this trip marks our third anniversary of being in a foreign country during the Champion’s League Final, so that’s been a fun little football streak for us.

With only two days, we felt we tackled Berlin pretty well (though must admit we didn’t spend any time in West Berlin). Saturday was a long day of touring the major sites on foot – Reichstag Building, Brandenburg Gate, Checkpoint Charlie and Memorial to Murdered Jews of Europe to name a few. We also saw the last remaining portion of the Berlin Wall and the site of Hitler’s bunker (and place of death) now a parking lot with little signage. At the cluttered Museum of the Wall at Checkpoint Charlie, we learned about the many ways people tried to escape East Berlin. Some went under the Wall by swimming through blockades in the river, while others opted for over the Wall by zip-lining in the dark of night from the roof of a building in East Berlin to one in the west. There were many clever escape attempts, especially in the earlier years when the Wall was more penetrable.

Berlin is a city that we may not recognize if we were to come back in twenty years. There is so much construction going on – every street you cross there’s more construction in the works. Berlin is ever-changing and Berliners are proud to live in such a dynamic city. Cheap rents draw artists, musicians and fashionistas, and the city is now one of the most vibrant and tolerant in Europe. (There was a lot of mention of the gay mayor by our presumably gay tour guide). Take that Hitler! Berlin has done so much to recognize the atrocities of that past, and through all the WWII and Cold War history, it really seems a new city has been reborn.

We were really impressed with Berlin and it seemed like the kind of place we could just hunker down for a while, not necessarily visiting sights but just enjoying all the different neighborhoods and soaking up the scene. Unfortunately, we have to say alvederzane goodbye. The good news is we’re heading back to Germany later this week when we visit Munich!

For more pictures, check out our Berlin photo album dated 21st May 2012 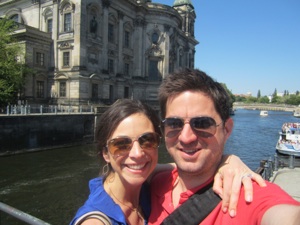