A weekend in Munich is a formula for happiness: Combine warm weather with beer gardens, add a dash of lederhausen and garnish with oversized pretzels. What’s not to love? Speaking of oversized pretzels, Germans nude sunbathing in the English Gardens?…nuff said.

While the purpose of our visit was first and foremost for Brent to attend to some business, we managed to squeeze in a whole lot of leisure and laughs. Previous to any beer garden stops, Brent and co hosted a conference back at the hotel and Katie took a day trip to Dachau, the first Nazi concentration camp and the one which all subsequent concentration camps were modeled after. A very worthwhile side trip.

The next couple of days we took to the business of beer gardens. With Brent’s coworkers Collin and Jat, we spent a few rowdy nights at the famous Hofbrauhaus. Our favorite bit was meeting Jang and friends, a crew of non-English speaking Koreans with whom we became united in the common language of beer hall antics. Jang (real name unknown) appeared to be the hazing victim of not only his friends but also his father. We marveled at how this slight noodle of a man, pie-eyed when we met him, continued to drink so many steins with such unfettered gusto. It goes to say that things subsequently went a little south for Jang and shortly thereafter, he was carried out “Weekend at Bernies” style by his friends, who weren’t phased in the least. They proceeded to take a dozen photos with us before they made their leave.

Another favorite memory of the weekend was hanging out in the English Gardens (Munich’s version of Central Park) and not just as a spectator of nude sunbathers. After lunch and drinks by the pagoda beer garden, we took rickshaws to a surfing hotspot at the edge of the park. Day and night surfers come here, wowing onlookers as they ride the mechanical wave of the river that flows under a bridge to the rest of the park. Beginner surfers strongly discouraged.

We loved Munich and hope to return and explore more of Bavaria.

For more pictures, check out our Munich photo album dated 27th May 2012 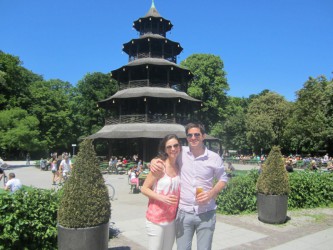