“The hills are aliiiiive with the sound of music…” That was the theme of our weekend jaunt to Salzburg. Our quick visit involved an extensive Sound of Music (SOM) tour, in which we got all sorts of interesting tidbits about the film and the real life von Trapp family.

”Let’s start at the very beginning, a very good place to start…” Some of the sights we saw were: the nunnery where Maria came from, the festival hall where the von Trapps sang before fleeing Austria, the two houses used to film the von Trapp family home (one for the front and one for the back), the road where the children dangled from trees in their play clothes, the famous gazebo (“I am sixteen going on seventeen”), the lake district where opening aerial shots were filmed, Mondsee Church where Captain von Trapp and Maria were married, Mirabell Gardens where scenes from “Do-Re-Mi” were filmed, not to mention a completely unrelated sight – the headquarters of Red Bull.

-The real von Trapps did not make a secret escape by foot over the Alps. They did walk 600 meters from their home to the train station, from which they travelled to Italy and later emigrated to the United States.

-The real von Trapps did not leave Austria until 11 years after Captain and Maria were married.

-The Captain and Maria had two more children together and she was pregnant with a third child when they left Austria.

-The gender, ages, and names of the children in the movie were not true to fact. For example, the oldest child was a son, and he would have been just slightly younger than Maria.

-The real Maria was hired not as a governess but as a teacher to the von Trapp child also named Maria, who could not attend school due to illness.

-The real von Trapp children were upset that their father was depicted as a strict and cold figure in the movie. According to our inside source, the father was the warm and affectionate one, and Maria was the strict, moody one. The children did not like her.

Besides the great tour, another highlight of the weekend was waking up on Sunday morning to what looked like a winter wonderland of snow. It was as if Salzburg had been Christmas flocked while we slept. Although we didn’t have the ideal footwear for snow (Brent is his work shoes and Katie with holes in her boots), we took in some more sights, peppered with multiple pit stops for warmth. After quick visits to the Salzburg fortress, Mozart’s house, and St Peter’s Cemetery, a bowl of goulash soup  never tasted so good. 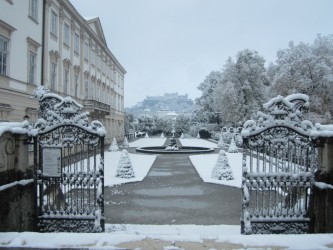