Colmar is said to be one of the most beautiful cities in Europe. We’re in the Alsace region of France near the German border, and the villages here are as German as they are French (natives are bilingual). The historic beauty of Colmar was such that even during WWII, American and British military tried to avoid bombing it. Today most of the buildings date from the 1200s-1500s, and the town center is mainly pedestrian only. The area is perfect for exploring the Alsatian Route du Vin (Wine Road) and for simply relaxing and enjoying the beautiful half-timbered village ambiance.

Speaking of – we stayed in a half-timbered beauty (circa 1500) – an apartment owned by the very welcoming Philippe and Jeanine. Upon arrival from the train station, Philippe offered to give us a three-hour historical walking tour of the village, which despite cutting into happy hour, was actually really interesting. Philippe explained why the houses were different colors (red for a Catholic family, blue for Protestants, green for country workers, pink for winemakers, etc.) and why the walls of the buildings jut out with each higher floor (to avoid paying taxes which were based on square footage of the ground floor only). He also showed us the home of Bartoldi, the man who sculpted the Statue of Liberty and many other impressive stoneworks throughout town. Our man Philippe also gave us some very good restaurants tips, which we made good on over the course of the weekend.

Colmar has a drier climate than most areas of France, and coming from dreary London we really appreciated the warm weather. One of our favorite activities (or non-activities really) was sitting outside on the sunny terrace at Winstub Krutenau, on the canal in the Petite Venise section of town. It was the perfect spot for drinking local wine (or beer) and eating tartes flambees (tasty bacon-bit sprinkled, thin crust Alsatian pizzas). As usual for France, the local pastime is very much centered around eating, and we embraced that spirit wholeheartedly. The food is very much German influenced – you’ll find not only crepe stands but pretzel vendors too. Very cool. And we discovered that we very much like Munster cheese, from the nearby village of Munster of course.

On Saturday we ventured out to two nearby villages on the golden colored wine route – Riquewihr and Eguisheim. Both were tinier, half-timbered versions of the same. Eguisheim was unusual because the town is laid in a circle. For such a tiny village there were a considerable number of wineries offering “degustations” (tastings). The wines of the region are mostly whites (Gewurzt, Riesling, Muscat, Pinot Gris), but we did enjoy the Pinot Noir, which was very light and always served chilled. Chilled red – we’re thinking about starting a new trend back in London. 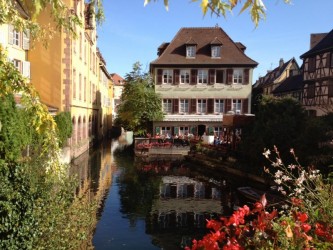