We brought in the New Year in beautiful Halong Bay. We were very fortunate. Often it is so smoggy (from Chinese pollution the Vietnamese say) that the views are not so great. But we had blue skies so were pleased. We went for a one-night cruise from Hanoi. The drive up was most frightening – what rules of the road there may be, they are not abided by. And on the way back we had the world’s slowest driver, who displayed road caution the likes of which not commonly seen around here. However, the cruise itself was great.

Back on the cruise, we were served THE WORST New Year’s Eve meal. It was supposed to be a fancy, six-course “gala” dinner, but in fact it was spit-it-out-of-your-mouth inedible. It was a shame, because the Vietnamese meal they served us at lunch was delicious. But they tried to do a little something different, a french-inspired dinner that just didn’t work. It became comical and bonded us to our fellow diners, who like us, couldn’t believe just how bad it was. Being that it was New Years, some drinks were had. In the end, the drunkest person on the cruise was Chris, the ship’s maitre d’ and the man in charge of our health and safety in event of emergency. By 23:00, he was seen showering himself with Champagne, leading a dance party on the upper deck and generally instigating debauchery. The rest of the staff observed festive restraint (which wasn’t nearly as amusing) and even Captain came out for a convivial toast.

We had a grand time because early in the night (over our ghastly meal) we made friends with a South African couple and the Mr. – well, he liked to get after it shall we say? Early on, during a dreaded game of Pictionary, Katie got teased for her depiction of Spain (especially embarrassing as there was a family of Spaniards aboard). However, the prize went to the poor girl who drew some squiggly lines for a spring roll. She was thereafter referred to as, “SPRING ROLL!” by our aforementioned drunk South African mate. He ruthlessly taunted her with outbursts of “SPRING ROLL!” all night long. Ah the memory still brings a chuckle. 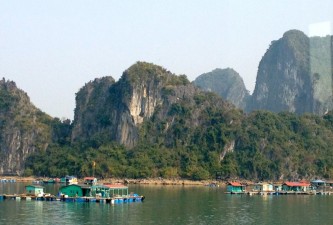