It was a beautiful day in Bavaria on Thursday. Brent and his coworker Hendrik were even able to eat lunch outside, enjoying massive Bavarian portions in the early spring sunshine. Katie spent a couple hours strolling the strasses of Munich. After some difficulty coordinating, Brent eventually found her, sipping a rossini on the plush, red couches of the Mandarin Oriental. It was finally the weekend and Brent was ready for a cocktail too. Later we walked to dinner at Restaurant Pfistermuhle where we were well looked after by a thickly accented waiter at our corner table nook for two. The evening was just right – a traditional bavarian meal under the low vaulted ceilings of a former mill house. The bakery is still in business nearby – an enterprise over 400 years old, imagine that!

Friday greeted us with rain. Brent went into the office for the morning and Katie enjoyed an ideal breakfast at a restaurant overlooking Marienplatz and the gothic clock tower. When in Germany, an ideal breakfast consists of hearty brown bread and six or seven local cheeses. That afternoon Hendrik drove us to his hometown, Bad Aibling, about an hour south of Munich on the Autobahn. Hendrik’s wife Dani had prepared an impressive spread of Spanish tapas. (“You like tapas Brent?”) She had gambas, meatballs, a Spanish omelette, Manchego cheese, bread and tapenades, marinated olives, cold polpo salad, stuffed mushrooms and bacon-wrapped dates. The night flew by, sitting outside around the bonfire, drinking local beer, wine and schnapps (for the health) and laughing about schwanzparades.

After a very restful sleep at the Lindner’s Hotel, Hendrik collected us for a drive through the Bavarian countryside and a visit to Lake Chiemsee (the Bavarian Ocean). We took a short ferry ride over to Frauen Insel (Women Island), named for the women’s monastery there. A quick walk around the island and a visit to the little church earned us a beer before heading on. Back at the Oeller’s, we met Hendrik and Dani’s two sons before saying our “ciao ciaos.” We were ready for nap time at the Lindner. Later that evening, we enjoyed our Bavarian supper at the Stub’n, though the service was so painfully slow that Brent had to leave Katie to compose himself while she settled up the bill. It was planes, trains and automobiles getting home, with frequent outbursts of “We’re coming for you Dashy!!” 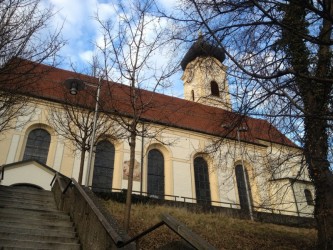