We just returned from a ski weekend in Chamonix, France with Brent’s coworkers Courtney, Colin and Dara. After a late arrival and hour-long car ride from Geneva Airport, we were thrilled to stumble upon a cozy, Alpine restaurant on Chamonix’s oldest rue. We were all so happy to at last be settled in the village and tucking into a delicious meal that we weren’t even fussed by the irritable French servers.

Some things surprised us about skiing here. For one, it is a lot less expensive than skiing in the states. Here we are at one of the top five ski resorts in the world, and a lift ticket costs about 50€ (compared to over $100 in California when last checked). Renting equipment for the day costs just slightly over 20€. Ironically, it costs the same to go up the lift whether or not you ski – so there is no discount for someone like Katie who just wanted to ride up and enjoy views of Mount Blanc. Also different to us was the fact that everything gets going a lot later. Colin and Courtney were at the ski rental shop at 8am, thirty minutes before it opened unfortunately, and there was no sign of life for coffee or breakfast. Although this was irritating to find out on day one, it became somewhat of a relief to know that you didn’t have to get such an early start on the slopes.

After some frustration walking in circles to find a ski lift, the skiers were off for a beautifully clear morning on the mountain (Mount Balme to be exact). Colin had a new camera helmet and captured some great videos of Brent shredding the gnar. Despite the late start, it was a great day and lots of runs were had, getting the CPR down (cost per run). Meanwhile, Katie took a train up the mountain to Mer de Glace, France’s longest glacier, spotting chamois (mountain goats) along the ride. From the train she took a gondola, then hiked down 437 steps to enter a blue ice cave inside the glacier. Very cold, she ticked that box and moved on. We rendezvoused back in town for apres-ski at a bar called Boogie Woogie (right?) then walked to dinner at restaurant Panier des 4 Saisons, where we were the spirited table in the corner. We slept well that night, full on steak au poivre and Bordeaux wine.

Saturday the boys returned to the mountain, this time to Mount Brevent. It was a snowier day and going up the lift was like hanging suspended in a cloud. For the gals it was a perfect ladies day – strolling the village, shopping and lingering over a three-hour lunch. (The men didn’t go hungry either, having enjoyed a sit down lunch on the slopes at 60€ a pop.) Katie and Courtney topped off the day with massages at hotel Albert 1er followed by girl talk and champagne in the hotel bar. The men meanwhile were enjoying pitchers of beer and the rowdy apres-ski scene down the road at Chambre Neuf. All in good spirits, we enjoyed an over-the-top Swiss meal at La Caleche, a famous fondue restaurant in town. There, in our corner table surrounded by cuckoo clocks and old books, we ate and drank in the style that would have made Hemingway proud. When Colin started making sandwiches with fondued slabs of rib-eye beef we figured it was time to make our departure. 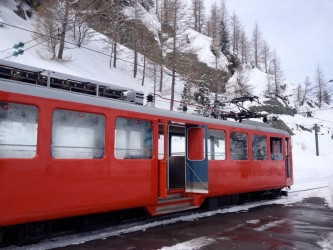