From Noto we headed to Siracusa. The first stop was a quick visit to the ancient Greek and Roman Theaters, where we marveled as always at the achievements of these two civilizations. We also visited the Orecchio di Dionisio (the ear of Dionysius), an ear shaped cave from which Dionysius (whoever he is) used to eavesdrop on his prisoners. The most amusing part for us was heading inside this enormously cavernous space with loads of animated Italian children on school field trip. What noise!

From the ruins we moved on to the historical center of Syracuse, the charming island of Ortigia. We had a most memorable lunch at Caseificio Borderi, a family-run deli in the market, where the pleasant signore presides happily over a crowd of hungry locals. His son turns heads as he brings forth for his father pillow-sized rounds of cheese from which the fresh mozzarella sandwiches are made. His daughter creates colorful antipasti platters with local meats, cheeses, and sun dried tomatoes (the platter itself made of focaccia bread). Throw in the two cups of red wine and you have the best value meal of the trip. Being that we were eating our way through the trip, we then made our way to a nearby cafe to try our first cannoli. Sweetened ricotta filling…most agreeable!

We enjoyed the tangled narrow streets of Ortigia and were most impressed by the pristinely kept Piazza al Duomo, where we took some selfies and enjoyed the Godfather accordion music played by a boy on the steps of the Duomo. It was a quick visit to Siracusa but we really liked it and were happy to have seen it. On the drive to our agriculturismo, we observed that Sicily feels a lot like California. The road goes through lots of tunnels. Outside the window are views of orange and lemon groves, olive trees, Mt. Etna and even an enormous oil refinery. Along the way, we took the opportunity to ask our driver Simone our burning questions about all things Sicilian. (Do you really eat so much cheese and pasta??? Mamma mia.) 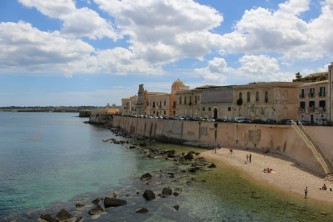