For two nights we stayed at a working farm called Terre di Himera, owned by the lovely Maria and Fabrizio. Mostly they make there own olive oil, but they also grow fruit trees and crops and raise chickens. The highlight of staying at any agriculturismo is the food. At dinner especially, the food just kept coming and coming, all simply prepared with local ingredients. Like Maria said, “The less you manipulate the food the better it tastes if you start with good ingredients.” The artichoke carpaccio was one of Brent’s favorites. It goes without saying he also liked capping the night off with a glass or two of grappa (for the health). Other Sicilian specialties at the time of year we visited were:

Almonds (used a lot in baking of cakes, cookies and pastries)

Pistachios (found in everything from salami to cannoli)

Chocolate from Modica specially processed you taste the sugar crystals

One day, Fabrizio was kind enough to drive us to the coastal town of Cefalu. The first thing we did was visit the main piazza and cathedral, which impressed us with its modern stain-glassed windows and Byzantine mosaics. After that we completed a rigorous hike up La Rocca (from which the calves were sore for days). After the fall of the Roman Empire, the population of Cefalu moved up La Rocca to better defend itself. At the top you can walk around ruins dating from 5th century BC. It was a nice place to admire the wildflowers and the two-toned water of the sea far below.

For more pictures, check out our Cefalu photo album dated 1st May 2014 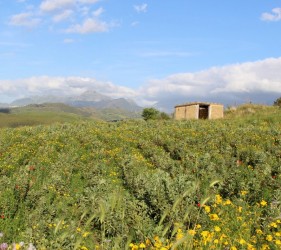