From Taormina we did a day-trip to Mount Etna and Gambino Winery. Our driver, Danilo, was a funny young man. We nicknamed him Dani Cannoli. First, he took us to a small village on Mount Etna called Zafferano, which had to be rebuilt after one of the many devastating earthquakes in the region. Turns out Dani Cannoli’s grandfather was from this village and had to evacuate for a few years while the town was rebuilt. We said “bongiorno nonno” as we passed his former apartment and continued our drive on up the big volcano.

Mount Etna is 3,300 meters and you can go as far as 2,500 meters by car, which is what we did. We stopped at Silvestri Crater, which was nearly entirely consumed with fog while we were there. The most impressive bit was the window in a nearby souvenir shop. From inside looking out, all you see is big, black rocks going all up the glass. This was former lava, that came to an stop just before crashing through and covering the entire building.

Besides the volcano, the Mount Etna region is known for two things, honey and wine. We stopped at one place for honey tasting and that was interesting because each honey was associated with specific health property (depending on the flower from which the honey was harvested). For example, honey from Eucalyptus was recommended for treating sore throats. We got a little honey and some pistachio pesto, which is made throughout the region.

From there we drove through some beautiful scenery and came to Gambino Winery, which was very modern and buzzing with wine tasters. The tasting came with a full on meal of local cheeses, salami, sausages, sun-dried tomatoes, marinated mushrooms, and bread. This is where Dani earned his nickname because he came up to us during our lunch and said, “If you want I can get you some cannoli from the back. It’s usually only for the drivers.” It was all very clandestine, and we were told we had to eat them in the car so the other customers wouldn’t see.

The highlight of our winery visit was when Dani organized for Mr. Gambino himself to give us a private tour of the winery operations. Any time we can get a little special attention from a winery and meet the people behind the label we’re thrilled. He was a really nice man whose family has been making wine on Mt. Etna for generations. As often happens, he apologized for his English, and we felt bad for not knowing Italian. He and Dani had a little discussion…should he refer to the grape seeds as “pits” because we’re American, or “pips” because we live in England? It was very sweet.

For more pictures, check out our Mount Etna photo album dated 10th May 2014 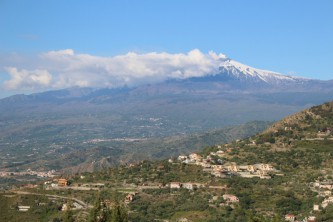