From our restful break on “the island” we travelled to Taormina for the last stop on our Sicily tour. After climbing higher and higher up the cliffs, we finally reached Villa Ducale, where we were quickly won over by the views. (For a place with so many earthquakes they sure like to build into the cliffs). Walking from our hotel to town, we passed a small church called Madonna della Rocca, so called because it was built right into the rock and makes like a cave when you are inside it. We also past lovely views of the town, the Greek Theatre and the sea.

Taormina was every bit as enchanting as we’d been told. There were a lot of good shops, excellent restaurants and a number of beautiful, open piazzas. We visited the Greek Theatre and marveled at the ruins (more than 2,500 years old). Beyond that, mostly we wondered around shopping for necessities (ceramics, barrique grappa for Brent and a new purse for Katie). While having a drink in Piazza al Duomo we had great seats for watching the street entertainers, and we saw a little Dashy look alike. (Lots of things remind Katie of Dash when we’re traveling, but this pup was legit.)

We lucked into a wonderful, seafood dinner at a restaurant run by two sisters. Our plan was to go there for a drink and have dinner elsewhere. But as we sat there enjoying the wine, a steady stream of repeat customers (greeted like family) kept turning up. Shortly thereafter, the two sisters were turning people away. We watched as the sisters worked the tables around us, explaining each menu item with great enthusiasm and detail. Only the freshest fish caught that morning… everything thoughtfully presented and prepared… it all sounded so tempting! (Especially in their pretty accents.) Realizing how good the place must be, we asked if we could stay for dinner. They were very accommodating, and we relished our meal. We did feel a little badly though, because it became apparent that had taken another couple’s reservation. (Who had to wait outside while we savored the tuna tartare and fresh pasta.) The next evening, when we returned as repeat customers, we were just hoping that no one had pulled the same maneuver.

For more pictures, check out our Taormina photo album dated 7th May 2014 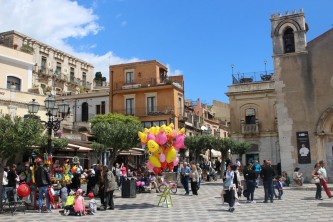