Monday was a bank holiday here so we ventured off to Cambridge for our first official day trip from London. We went with London Walks so had a guided tour of the area. First stop was the Cambridge American Cemetery. Next we got to the town of Cambridge itself, which was just the right size for our full day visit.

We didn’t know much about Cambridge University or British universities in general. We learned that Cambridge is actually made up of over 30 separate colleges, and we visited some of the most well known. Shocking to us was that tuition at Cambridge is the same as at other English universities, apx £3,300 per year (about $5,000 USD). To those of us from California, this seems like a steal. But to our tour guide, this is an outrage. Not long ago he informed us, English universities were free to attend AND students got a stipend for living costs. One fellow he knew actually profited from the deal. Hard to imagine anything like that these days.

There have been so many greats on these college grounds. It was fun to see the college where “Newton got beaned by the apple” and the college that turned out two distinctly different characters: Charles Darwin and Sasha Baron Cohen. The last activity of the day was “punting on the Cam,” a scenic river ride on a flat-bottom boat which weaves through the colleges and under bridges and willow trees. We had a professional punting (guiding) our boat, but any one can do it and there were plenty of rookies out there which made for an entertaining bumper-cars like ride at times. 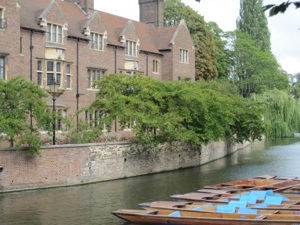