It’s been a very busy weekend with our good friends the Sercers (aka the Griswalds) visiting us from North Carolina. It was Paul and Kelly’s first trip to London so we had a lot of touristy things to see…Big Ben & Parliament, Westminster Abbey, Buckingham Palace, Tower of London and Borough Market, not to mention loads of walking with a few pub stops sprinkled in to wet our whistles. It was a banner weekend filled with lots of laughing (especially after we settled into a few steins at the legendary Tiroler Hut).

This weekend was also the annual Notting Hill Carnival in our neighborhood – the largest street festival in Europe and the second largest street festival in the world, with our flat located just one block away from the epicenter of the carnival. Most locals leave town for the weekend (it’s a holiday weekend here anyway) and all the neighborhood shops were boarded up in preparation.

While for the most part we were able to stay away from the raucous, we did walk through the eye of the storm on Monday. We’re talking block after block of “jamaica-mon,” pot-smoking, reggae-bumping, red-stripe drinking, smell-the-jerk-chicken-smoking, parade-floats-and-masquerading, hold-your-valuables-close-and-watch-for-pick-pocketing, drunk-men-in-your-garden-weeing, there’s-no-trash-cans-so-rubbage-lining-the-street kind of party. Hats off to the city of London though. There was a huge police force presence and no one was allowed to linger in the streets at night after the party ended. Street sweepers came though during the night and by morning everything was sparkling again – hardly believable. 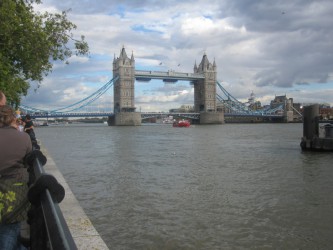