Last weekend we made our way up north to the medieval city of York. The city is probably best known for two things: it’s large, gothic cathedral called York Minster and a very well preserved 3-mile medieval wall that surrounds the town. The wall was first built by the Romans around 50 A.D. and was later added to by the Normans in 1066.

We packed a lot into the weekend including an enjoyable walking tour given by a local volunteer and an evening at York Minster’s evensong (although by minute 45 it was getting a little long, not to mention cutting into happy hour). We even did the highly unusual for the Boswells and made not one but TWO museum visits…the York Castle Museum and the Yorkshire Museum. Don’t know what got into us, but we are glad we went to both. The York Castle Museum had a neat exhibit where they recreated a Victorian village (circa 1800‘s) using real store fronts that were recovered from the area. The Yorkshire Museum displayed ruins of St. Mary’s Abbey, one of many monstrous cathedrals destroyed by Henry VIII when he created his new “I want to divorce as many women as I’d like” religion.

One of our favorite finds of the weekend was a Belgian pub recommended to us by our B&B owners. We found ourselves being drawn back to this cozy pub each day (Sunday afternoon included). The pub, called The House of Trembling Madness, had a great atmosphere (the snug attic of a tipsy 12th-century medieval building) and a wide selection of tasty Belgian ales. We had quite the time Saturday evening over happy hour when Katie struck up conversation with three war vets from Britain. They were eager to talk and tell stories. Unfortunately, their happy hour started quite a few hours before ours, so it was tough to understand much of what they were saying. It was still a lot of fun.

Another great stop was at a well-known tea shop called Betty’s, where we sampled a new food for us and something popular in York – a pikelet, which is like a crumpet or thin English muffin – a buttery, nooks-and-cranny delight.

While the rains held off for the most part of our visit, there was a steady rain on Saturday night and we couldn’t believe how much the town flooded. One sidewalk that we had walked down on Friday night was head-deep in water when we were leaving on Sunday. The flooding must be a fairly common occurrence in York as walking paths were blockaded and doors were boarded up by mid-day. 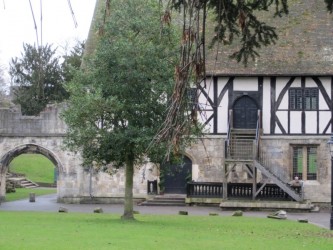