While we’re enjoying life in the big city, we felt it was high time for a relaxing weekend in the country. After a three-hour train ride on Friday evening, we were happily situated in southwestern England, in a county called Devon and just over the border from nearby Dorset. This area is known to be of “outstanding beauty” and has England’s only natural UNESCO World Heritage site, the Jurassic Coast.

As the name implies, there are some really old rocks and fossils to be found here, which is rather fitting as there are also a substantial number of really old villagers. We’ve never seen so many senior power-scooters in one town as we did in Sidmouth. Conga lines of them. Now it’s been a long time since we’ve been to Florida, but this must surely have the highest ratio per capita of canes and Houverround electric scooters (queue The Beach Boys: “Houverround Houverround, I get around”).

The secret to this longevity must be in hiking the cliff paths between villages. We thought it was pretty great how many old people were on the trails despite the steep hills and strong winds. The setting can’t be beat; up there on the chalky, white cliffs surrounded by grazing cattle, views of the coast on one side and green pastures on the other, comforted in the fact that your next pint is just around the corner in a village called Beer. 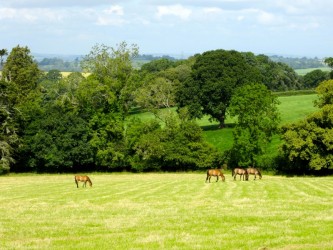