Last weekend we headed back to one of our favorite corners of England, the Cotswolds. This time we stayed in Stow-on-the-Wold, with visits to many nearby villages – our favorites being: Burford, Bourton-on-the-Hill, Stanton, Snowshill, Bibury and the pocket-sized hamlets of the Coln Valley.

Saturday we hiked around the villages of Kingham and Bledington. The public footpaths are great because they take you through private property, usually across pastures of grazing cattle or sheep and occasionally even through someone’s backyard. It was fun to see so many farm animals up close, although the sheep seemed to be a particularly curious lot. At one point, we found ourselves surrounded by a massive group of sheep who had been grazing one minute, and the next were fiercely bleating and closing in around us. They were rather uncomfortably close, making Katie uneasy, especially when they started nervous-peeing all about. Fortunately, Brent maintained the calm of a sheep whisperer and fearlessly guided us to the safety of the next hedgerow.

Later that day we visited the Broadway Tower, built in the 1700s because some earl decided that he should have a dramatic free-standing tower to call his own. Since then, the tower has been used to track planes during the world wars and as a bunker during the Cold War. Today, it’s a nice place to picnic and if the little old lady at the base of tower gets your ear, you’ll most certainly find yourself forking over the absurdly over-priced admission to climb to the top. That said, we had a gloriously clear day and we did enjoy the view over 12 shires clear to Wales.

All the hiking and exploring was capped with a few noteworthy pub stops. We discovered a few great gastropubs in the area and enjoyed some terrific meals. We especially enjoyed our dinner at The Horse & Groom in Bourton-on-the-Hill, and lunch at The Kingham Plough. On Sunday we did the much shorter but scenic stroll between the villages of Upper and Lower Slaughter before heading our Zip Car back to London. It was the first time we had ever been behind the wheel in London and it was a bit of a thrill driving up to our flat in something other than a four-door saloon black cab.

For more pictures, check out our The Cotswolds photo album dated 18th October 2011 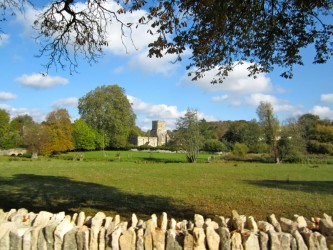