We were recently invited to join our favorite twenty Kiwis for a weekend in Norfolk. We stayed in a manor house in the small village of Happisburgh (which the English pronounce “Habsbro”).  The Happisburgh Manor is a seaside villa with the largest thatched roof in East Anglia and possibly in the UK. Set on ten acres, it is a modest home of eight bedrooms with basic amenities including a gym, sauna, heated pool, massage room, game room, study and most curiously….a disco. The property is for sale if anyone is interested. It was a great weekend, especially because Matt joined us and we were able to bring Dash – our solo Brit!

One of the highlights was dinner at a gastropub in the country called The Gunton Arms, where the chef cooked our porterhouse steak and potatoes over the flames of an enormous, open log fireplace. Apart from that, the weekend consisted of far too much drinking and a few leisurely strolls through the surroundings. Nearby was a beautiful red and white lighthouse and a not so beautiful trailer park. They always have the best locations don’t they?

There was the requisite stop to the Happisburgh village pub, an old school establishment which felt like time traveling back to grandpa’s family room circa 1982 (the anti-Gunton Arms). There was a Charlie Brown christmas tree in the corner and loads of family photos on the mantle. Sir Arthur Conan Doyle was a frequenter in the 1900s and the pub was said to have inspired some of his Sherlock Holmes story lines.

Back in the drawing room of the manor, there was a heated quiz night (fueled by the consumption of large amounts of Doritos) followed by a catered meal in one of the two dining rooms. Part of the weekend included an ugly Christmas jumper (aka, sweater) competition. We were proud when our Dash took the prize for cutest jumper. We drove home on Sunday, slightly worse for the wear and happy to have been part of the weekend. 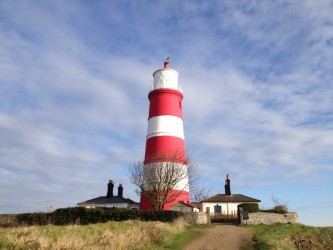