Every year during the August bank holiday thousands flock to our tidy little neighborhood for Europe’s largest street festival – the Notting Hill Carnival. Although it is largely peaceful, most locals leave town for the two-day party madness. We’ve learned to do the same. This year we wanted to go some place where we could bring our puppy and we still had never been to Cornwall, one of Britain’s most well-loved holiday destinations, so that became our planned escape.

We stayed a week in an apartment overlooking the harbor in St. Ives, a fairly large fishing village with numerous beaches and plenty of delicious seafood restaurants. With no car to make us feel we had to go anywhere, it was a very relaxing holiday.

Every morning we walked to the local pasty shop for freshly baked scones, which we ate the Cornish way with local clotted cream and raspberry jam.

Tummies still full of butter, we’d begin to look forward to our next three-course meal at one of the many beachside restaurants. We mention the three-courses because in Britain everyone orders three-course meals. It’s considered odd to not get a starter. In fact, the one night we didn’t order starters, our server said, “Jumping right in with the mains then tonight are we?” This is one of those little cultural differences that we find amusing but hey, we can get onboard with three-courses. One night we were lucky enough to be seated across from Dame Judi Dench as she lingered over her three-courses, so that was kind of fun. We thought it was a shame that she couldn’t meet our Lady Dash.

There were lots of firsts for our little 5-month old Dashy. First black cab ride to Paddington, first long-distance train ride, first whiff of salty sea air and first play on the beach! We’ll never forget how she bounded onto the sand the first time we let her off the leash (or lead as the Brits say). Always she would make friends with other dogs and children. One quiet fair-haired boy of about 10, after watching Dashy chase other children around for a few minutes, asked in the cutest English accent, “Can I have a go with ole Dasher?” It became one of our favorite quotes of the weekend. That and, “Any more for the boat trips? Self hire motor boats?” which we heard called out day in and day out at the harbor.

Besides a worthwhile excursion to a well reputed gastropub in the country, we only did one other outing from St Ives – an open top bus ride to the villages of Marazion and Penzance. Not sure why anyone would suggest a visit to Penzance, but Marazion was good. We got to see St. Michael’s Mount, which is an island with a huge castle on it. At high tide, you can take a small boat across the water to tour the castle but at low tide you can walk the causeway from the mainland to the island. Very cool. The castle is still lived in today by some well-endowed Lord and his family. He gave the castle to the National Trust, but still retains a 999-year lease for the family to live there. It’s hard to imagine living in a castle on your own island.

Sea air, pasties, art galleries, sweet shops and sand in your toes…it was a very Cornish and English holiday. We’ll have fond memories of it. 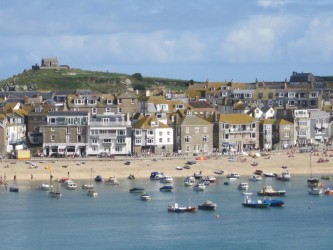