Sevilla. We were hoping that the 8.5-hour train ride from Valencia would be worth it. It was. This is such a well-preserved, elegant, Spanish city. This was Katie’s favorite stop in Spain so far (even though she was sick for most of our stay). She knew she loved it when, having been there only fifteen minutes, we stumbled upon a group of men performing a traditional serenade to some ladies up in a balcony.

From our double-decker bus tour, we spotted a classy hotel, which looked good enough to admire from the inside. We had previously noticed a lot of people in Barca futbol attire, and Brent remembered that Barca was playing Sevilla in a big game that night. Approaching the hotel, we saw a large police force guarding the entrance, and we started to think…since this was clearly the nicest hotel in town, maybe the Barca futbol team was staying there.

At first, the hotel security didn’t let us in (we didn’t exactly look like their usual clientele) but Brent played up the clueless American act and, speaking English, claimed we wanted to have lunch in the restaurant. They must have figured…these two aren’t here to harass our futbol players, and let us in. We were excited to see several of the starting players in the lobby. Considering we had just watched these guys play last week, it was pretty sweet. There was also a highbrow wedding reception going on (think society people – women with professionally done hair and make-up and wearing Kentucky Derby type hats). It was a fun afternoon, sitting there having a drink in the lobby of this grand hotel, watching some of Spain’s biggest sports figures and Sevilla’s high-society parading around us.

The next day we went to a traditional bullfight. We had great seats in the front row, and the bullring was awesome. It was an eye-opening experience. The great matadors in Spain (we didn’t see them) are looked up to like the great athletes in America. We were really entertained by their showmanship and bravado. We made a video of it if you’re interested, but be warned the last minute is a little bloody. After the bullfight, we caught a flamenco show. Sevilla is home to flamenco, and young girls start learning the dance as early as they can walk. It was a really good show, and we were both somewhat amazed at how much the dancers and musicians got into character.

For more pictures, check out our Sevilla photo album dated 10th May 2010 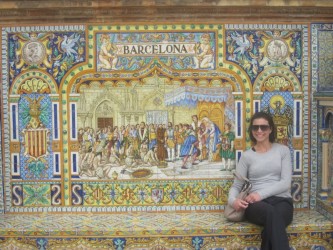